Australian shares continued to trade lower by afternoon amid broad-based sell-off in the market. A cautious stance prevails in the market ahead of the annual meeting of central bankers, while record rise in COVID-19 cases also make investors jittery. Investors also reacted to earnings numbers of some big players such as A2 Milk, Qantas Airways, Woolworths, Whitehaven Coal, Ramelius Resources, Appen, St Barbara, Eagers Automotive and others.

On the sectoral front, nine of the eleven sectors were trading in red zone. The health care sector was the worst performer with 1.5% loss. Utility and tech sectors also witnessed surge in selling and declined over 1% each. Among others, material, consumer staples, A-REIT and financial were reeling under selling pressure

On the COVID-19 front, New South Wales reported record 1,029 new locally acquired cases in the past 24 hours, the highest daily number ever recorded in Australia.  Meanwhile, Victoria’s daily case tally rose to 80, while Queensland reported no new case for the second day on Thursday. 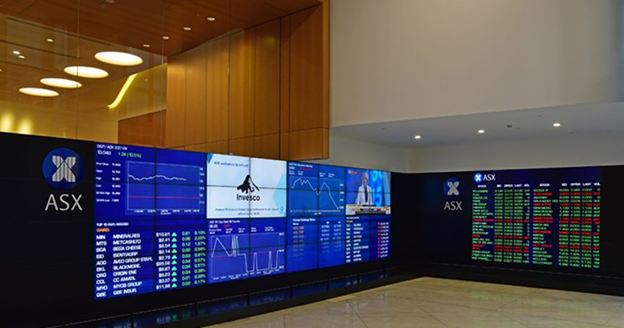 Technology firm Appen (ASX:APX) topped the losers chart by falling over 15% on disappointing earnings. The profit more than halved to US$6.7 million during the first half of the year, as customers allocated resources to new, non-advertising projects. The revenue dropped 2% to US$196.6 million. It also declared an interim dividend of 4.5 cents a share, in line with its interim dividend paid a year ago.

Gold miner St Barbara (ASX: SBM) saw its shares drop nearly 3% after it halved its final dividend for 2021 financial year. The company reported a statutory loss of AU$176.6 million for the year due to a hefty impairment loss of assets. The revenue dropped 11% to AU$740 million, compared to AU$828 million in the last fiscal.

Qantas Airways (ASX: QAN) shares were trading 2% higher after unveiling its 2021 financial results. The country’s largest carrier by fleet size posted a substantial full year loss due to coronavirus-led lockdown, but it started the new financial year in a solid position.

Premium branded dairy nutritional firm A2 Milk’s (ASX: A2M) shares tumbled over 9% after it reported sharp drop in its profit for 2021 financial year. The New Zealand-based company’s profit declined nearly 80% to NZ$80.7 million due to supply chain disruptions caused by the COVID-19 pandemic.

Shares of resource explorer Inca Minerals (ASX:ICG) fell 4% after it substantially upgraded the MaCauley Project potential. It has discovered large outcrops with visible copper mineralisation during recent mapping at multiple locations at the project.