ASX 200 listed gold mining company Newcrest Mining Limited (ASX:NCM) has entered a JV Agreement (fully-termed) for the Havieron Project with Greatland Gold Plc. Under the agreement, NCM has agreed to provide Greatland with a USD 50 million loan facility to fund growth drilling and some early works at the project.

Furthermore, the Company has now fulfilled the Stage 3 expenditure requirement of USD 45 million under the JV, making it eligible to earn an additional 20 per cent stake in the JV. Consequently, the overall interest of Newcrest Mining in the JV has now reached 60 per cent. 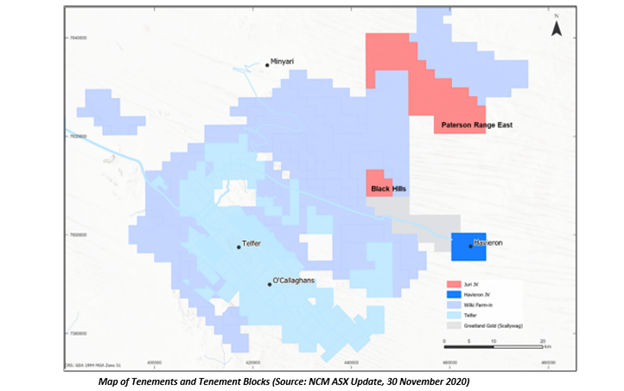 Additionally, the Company has executed a Farm-in and JV Agreement with respect to the exploration licences of Greatland’s Black Hills (E45/4512) and Paterson Range East (E45/4928), resulting in a new joint venture agreement with Greatland, known as the Juri Joint Venture.

Under the Juri Joint Venture, NCM has been granted an initial 25 per cent interest with the potential to earn up to 75 per cent interest through a total expenditure of $20 million over a two-stage earn-in, across a five-year period.

The current fully termed JV agreement provides a formal framework beyond the existing Farm-in Agreement while facilitating the expansion of exploration and some early work activities.

At present, the ability of the Company to earn a 70 per cent stake through the expenditure of USD 65 million remains unchanged along with the delivery of a Pre-Feasibility Study (PFS). Also, NCM remains the manager of the project.

The funding requirement of Greatland towards the completion of the Feasibility Study would be fulfilled by the new USD 50 million loan facility provided by NCM. The PFS is expected in Stage 4.

Under the terms of the loan agreement, the USD 50 million loan facility would bear a fixed interest of 8 per cent while additionally accruing interest at LIBOR or its successor rate.

Also, the loan facility has been secured against Greatland’s JV interest in the Havieron Project and would be utilised towards the completion of 30 per cent share of Greatland’s works and drilling activities for finalising the PFS. Thereafter, it will also be used for the completion of the Feasibility Study.

The loan repayment would be from the net proceeds of Greatland (80 per cent) from the production at Havieron. However, if NCM decides to exercise the earn-in option of acquiring 5 per cent additional stake at the prospect ahead of the Farm-in period at fair market value, the loan amount would be indemnified.