Lithium producer, Sayona Mining Limited (ASX: SYA) ramps up its approval process for Authier Lithium Project to create a sustainable and profitable new lithium mine for its Canada-based subsidiary, Sayona Québec Inc. The development comes at the backdrop of U.S. push for increased supply of electric-vehicle (EV) supply chain minerals and continued growth in demand.

Sayona Mining is an ASX-listed company focused on exploration and development of graphite and lithium deposits; the two raw-materials essential to manufacture lithium-ion batteries for use in the rapidly growing green technology sectors. Following the acquisition of the Authier Lithium project in 2016, Sayona Mining Limited formed its subsidiary Sayona Québec Inc. in Québec, Canada.

Québec aims of becoming a leader in the burgeoning lithium-ion-battery industry and sees itself well positioned to capitalise on the opportunity given its proximity to U.S. markets, including the Tesla Gigafactory in Nevada.

The company has stepped forward to lodge a Project Notice with the Quebec’s Government in the first phase of Authier approval process. The approval outlines the regulatory pathway stipulated by the Québec government for Authier to undergo Environmental Impact Assessment and review procedures as part of the BAPE (bureau d’audiences publiques en environment).

Sayona Mining estimates that the entire approval procedure would take ~13 to 18 months, including the completion of an environmental impact statement (EIS), public consultation and review. EIS alone is expected to take approximately five months for completion, which would see several on-site surveys including vegetation, air and water assessment.

Following the filing of the Project Notice, the company plans to hold several information and consultation activities with decision makers and the local community in order to work upon the directives issued by the government. The Quebec’s Government is reportedly expected to issue these directives, including the elements required to be incorporated in the environmental impact study as deemed fit, within 15 days of filling of the project notice.

Sayona is seeking approval on the foundation of a sustainable development approach for a mine processing that is likely to result in the estimated annual average spodumene concentrate production of around 115,000 tonnes (at 6% Li2O) with a mine life of ~14 years.

The review of DFS under the new parameters, participation in a joint study with Québec Government and engagement with the local community, remains the other key targets of the company on the road map of building a sustainable and profitable new mine at Authier.

It is worth noting that previous DFS studies have shown the potential for a sustainable and profitable new mine, with an estimated pre-tax net present value of C$184.8 million and initial capital expenditure of C$89.9 million. The mine is projected to deliver around 150 new jobs during the construction phase and around 160 jobs during the operation phase, on top of other positive economic spin-offs. Apart from the economic incentives, the company’s Environmental Assessment Study carried out in 2018 validated Authier to have no impact on the water quality of Esker Saint-Mathieu-Berry. 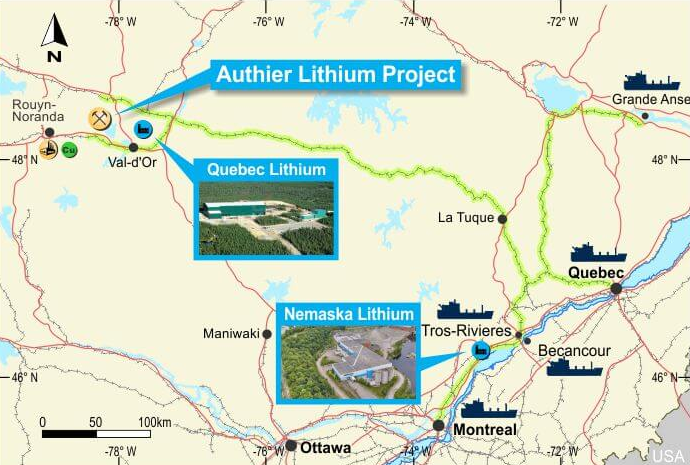 Authier Lithium project is located on the territory of the Abitibiwinni First Nation of Pikogan, favourably near the established mining support cities of Val d’Or and Rouyn- Noranda and has access to excellent infrastructure including rail and road transport, cost-effective hydro-electric power and skilled labour.

Sayona’s Managing Director, Dan O’Neill expressed the commitment and confidence of Sayona to deliver a profitable and sustainable new mine at Authier, which would add to the company’s project pipeline including its holdings in the world-class Pilgangoora lithium district of Western Australia and nearby Tansim Lithium Project.