The companies which fall under metals and mining sector are engaged with the exploration, extraction, production, development etc. of metal and mineral resources in different parts of the globe. These entities receive significant yield over a time-period, which is derived through the various works carried out at the locations with resources.

Let us now look at two such Metals and Mining Stocks as follows:

In 2018, It had been reported that the company successfully recognized a clay hosted lithium mineralised zone 3000M x 1000M (Northern Mineralised Zone) following phase 1 of its diamond drilling program. The current diamond drill program ~3,700 m would test the lateral extent of clay hosted lithium mineralisation within the Northern Mineralised Zone; the current program was commenced in mid-February 2019.

The above figure depicts the results from drill holes DHQ27, DHQ28, DHQ29, DHQ30 and DHQ31. It was reported that the results from Phase 2 would be utilised in the estimation of Hawkstoneâs maiden resource over the North Mineralised zone.

As per the release, DHQ27 â DHQ31 are 100m south of the most northern line, which also hosts DHQ36 and DHQ37, demonstrates the extension of the Northern Mineralised Zone and confirmed thick high-grade lithium intersections. Furthermore, results depict that lithium mineralisation has been pinching to the east, which was previously interpreted by Phase 1 drilling and geological mapping. Further, the drill program confirmed that Assays received from DHQ36 and DHQ37, which are located on the eastern margin of the identified mineralisation, demonstrated significant shallow lithium mineralisation.

It was also reported that the assay results from the 26 holes to date had successfully identified extension to the primary mineralisation up to 800m north, and mineralisation remains open to north, south & west.

As per the release, the assays are sent to the laboratory on a hole-by-hole basis from the ongoing geological logging and sampling. Also, the company looks forward to the estimation of a maiden JORC compliant resource. 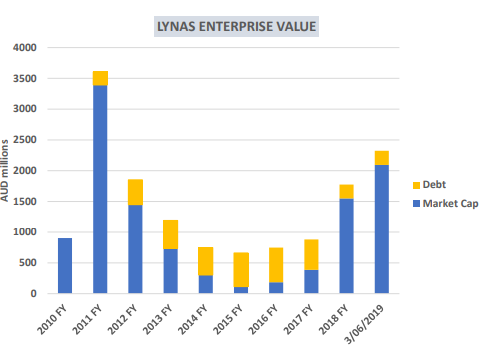 On 27 June 2019, Lynas Corporation announced that a ten-year extension JARE loan facility was signed. It is reported that JARE is a special purpose company established by Japan Oil, Gas and Metals National Corporation (JOGMEC) and Sojitz Corporation.

As per the release, the mining group has reiterated its commitment to supply to Japanese industry on priority, and Lynas had developed strong associations with key Rare Earths consumers in Japan since 2011. Also, the company had promoted the growth in the Japanese Rare Earths industry, and the loan extension provides the base for further growth in tech markets. Importantly, Lynas would work with the Japanese industry over the ten years period and develop strong supply chains to tap the growing demand for Rare Earth resources.

Reportedly, Lynas executed various business improvements such as increasing production output, sales, operating efficiencies and profitability in the past five years. Also, in May 2019, the mining company announced the Lynas 2025 project â detailing the companyâs growth plans for the next five years. Further, the ten-year loan extension would underpin the growth plans in the upcoming years, and it would also support the position as the worldâs second largest Rare Earths products of Lynas.

According to the new agreement, the principal repayments have been reduced to a nominal level-up to 2025, which would allow Lynas to accumulate cash flow from operations. Also, the cash would be used in the significant capital investment for the execution of the Lynas 2025 Project, and Lynas expects that growth plans would be self-funded by Lynas.

According to the release, the maturity date of JARE loan facility has been extended to 30 June 2030, along with a revised interest rate of 2.5% per annum. Also, a revised principal repayment schedule with minimal repayments until 30 December 2024 while voluntary repayments could be made without penalty. Importantly, the cash sweep mechanism is removed, and the restriction on dividend payments would be uplifted once the outstanding amount is under or US$60 million.