Qantas Closed On A Lower Side Of ASX Ladder

Qantas Airways Limited (ASX: QAN) is an ASX listed aviation company and the largest domestic and international airline in Australia with over 30,000 employees. The company has a stronghold in the long-distance flights and have a good reputation for excellence in safety, customer service etc.

QAN has identified four global forces that are likely to impact the business in the short and long run, and are as follows:

On 21st February 2019, the company announced a buy-back of 1,625,648,997 fully paid ordinary shares for the ongoing capital management. The total consideration for the shares to be bought back is $305 million, and the company will be using two major brokers; Citigroup and Macquarie Bank for the on-market transaction. It also stated the time period for the buy-back would be unlimited, and no shareholder approval was required for the buy-back.

On 9th May 2019, the company announced its trading update for March 2019 quarter. Some of the highlights of the update were as follows:

The group reported net passenger revenue of $8.02 billion, which is a 6% increase compared to pcp revenue of $7.6 billion. Total expenditure for the reporting period stood at $8.33 million, and underlying profit before tax (PBT) stood at $780 million. 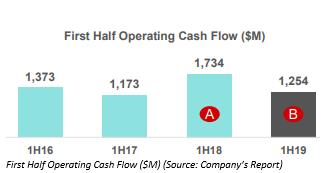