As per the announcement dated 3 June 2019, the field work at the company’s priority Billy Hills Zinc Project, located 25Kms east of Fitzroy Crossing WA and adjacent to the former Pillara Zinc Mine, would commence this week. Under this program, the geological mapping and surface sampling (field inspection) of targets would be undertaken to define specific targets for drill-tests; these targets were identified from Mithril’s desktop review of historic exploration data.

The company further intends to conduct meeting with the project’s Traditional Owners and local pastoralists to brief on its proposed 2019 exploration program as well as to organise heritage clearances of proposed drill sites.

Mithril believes that Billy Hills project is under-explored compared to Pillara Mine Lease (ML04/118), which hosts the Pillara Zinc Deposit wherein the bulk of historic drilling and geophysical testing had been carried out. Also, MTH intends to target large scale Zn + Pb + Ag at the project. 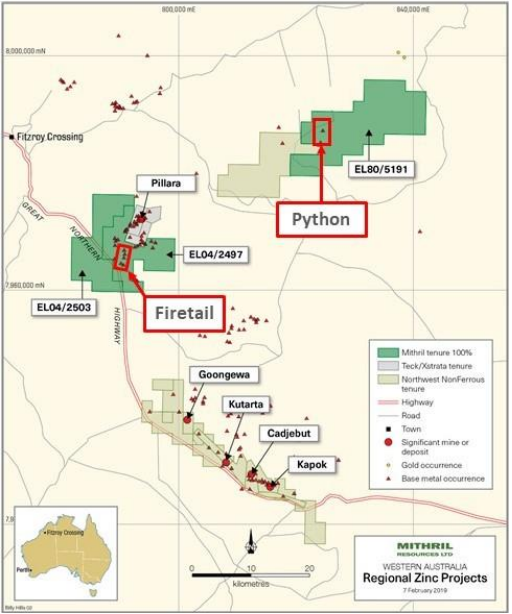 The Billy Hills Zinc Project is Mithril’s primary focus, which has identified two priority targets for immediate follow-up- the Firetail and Python prospects.

It covers a 1.5Km area and is in the southern part of the project area. As per the report, the target hosts long NNE trending mineralised fault zone wherein only three wide-spaced testing drill holes were drilled, two of which returned anomalous mineralisation. Furthermore, there had been no follow-up drilling or geophysical surveying in the fault zone since the early 1990s.

It covers a +1 kilometre and is in the far east of the project. As per the release, long NNE trending mineralised fault zone were drilled, which returned strong intercepts adjacent to Mithril’s tenure.

Furthermore, historical wide spaced drilling also intersected broad zones of mineralisation within the controlling structure, which were undertaken along strike to the north within Mithril’s tenure.

Per the announcement, MTH is seeking to introduce exploration funding partners and/or divest all of its other exploration projects. Also, the company is in talks with several companies who have expressed an interest in other projects within the MTH’s portfolio. More importantly, the company had executed the sale agreement of 15% interest in the Spargos Reward Gold Project for $50,000 cash subject to the successful completion of Conditions Precedent, which relate to the execution of various Deeds of Assignment with respect to third party royalty and mineral rights.