Metminco Limited Turned Over a New Leaf in September 2019 Quarter

Metminco Limited (ASX: MNC) is an exploration and mining company incorporated in Australia, that holds interest in a portfolio of copper, gold and other base metal projects situated within well-constrained metallogenic belts associated with the Andean Cordillera in Chile and Colombia. The company’s key focus is the Andes and Quinchia Portfolios in Colombia, which are about 70km apart and situated in Colombia’s Mid- Cauca Au-Cu porphyry belt. 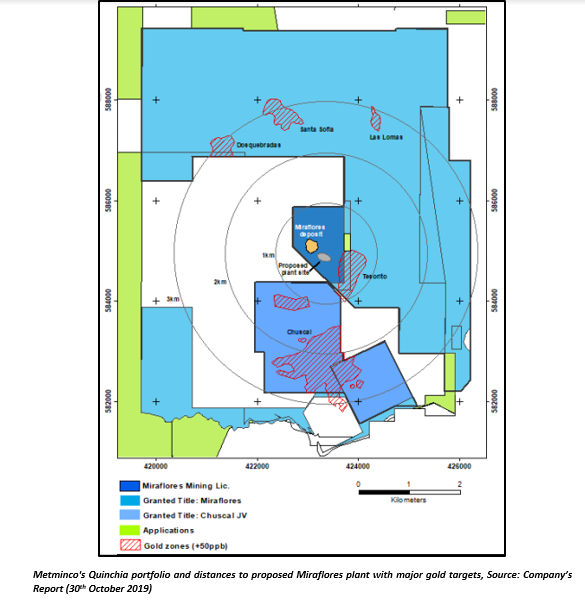 Metminco has recently released its quarterly report for the period ending September 2019 on the ASX.

The company attained a significant milestone in September 2019 quarter with completion of the merger with Andes Resources, establishing a leading gold explorer of Colombia with dominant positions in two gold districts of the well-endowed Mid- Cauca Belt.

The following activities were undertaken by the company during the quarter:

Conclusion of Merger with Andes Resources

The company successfully completed the merger with the Andes via an off-market takeover offer during the quarter. The merger brought together the company’s advanced Quinchia Gold Project, with Andes’ extensive tenement holding to establish a company with multiple exploration assets in prosperous gold camps.

The takeover was completed pursuant to:

The company completed a strategic review of all previous exploration, known targets and existing resources on its projects during the quarter.

The review involved the following developments: 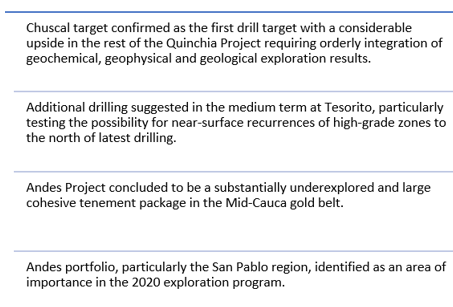 Metminco commenced the diamond drilling program at Chuscal gold target near the end of the quarter, under which the drilling is indicatively planned to target an average depth of 300 to 400 meters in each drill hole.

The company notified that the diamond drilling program will be a two-phase operation. It has planned to initially drill three holes, and then move further up to four holes, with the benefit of knowledge obtained through analysis of the outcomes from the first phase of drilling.

The company has recently reported about the conclusion of first Chuscal drill hole of the maiden drilling program, completed at a depth of 452.5 metres after passing through approximately 274 metres of hydrothermal alteration and breccias.

The company informed that the first samples from CHDDH001 have been despatched to ALS laboratory in Medellin for assay and the second batch will be despatched soon on completion of the geologic logging of the core. The company expects to receive a robust flow of assay results from November 2019 end through to February 2020.

The company reported the following activities post the September 2019 quarter:

Metminco anticipates being able to meet its business objectives in the near term and is reviewing its capital raising options over the next two quarters.

Stock Performance: MNC ended the trading session at $0.097 on 7th November 2019, with a rise of 3.2 per cent. The stock has generated a return of 19 per cent in the last one month.