Let’s have a lens over the pool of diversified stocks that ended the week in green:

Pact Group Holdings Ltd is positioned as the largest manufacturer of rigid plastic packaging products in Australasia with presence in more than 15 countries. The company listed under the material sector on ASX experienced the serious headwinds and weaker demand in the market during the first half of FY2019.

As a result, the Group reported a statutory net loss after tax of $320 million for the half year ended 31 December 2018, including a significant expense after tax of $355 million. Net profit before tax even before the significant items declined 29% to $36 million on the previous corresponding period. 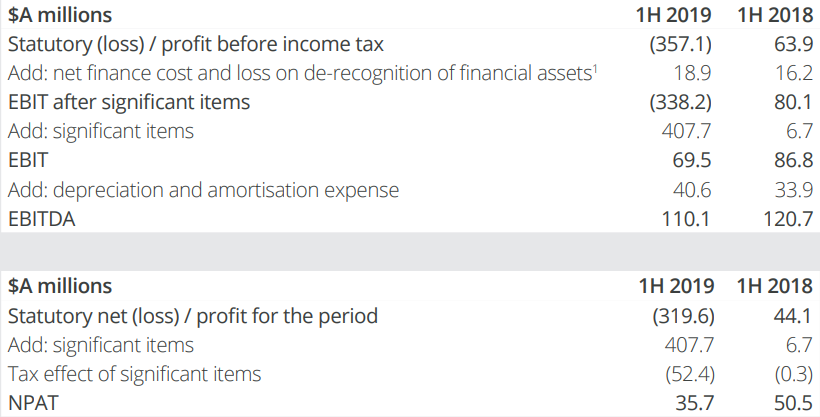 But the company is having a really good time on security exchange as the stock price has surged up by 9.449% to trade at $2.780 in a morning session on 28 June 2019 (3:14 PM AEST). The positive market sentiments seem to be led by the new debt financing arrangement.

In an announcement dated 27 June 2019, Pact Group announced that it has successfully secured extended debt of $380 million with the maturity of July 2020 to January 2022. It has also gained approval from lenders for creating the subordinated debt facility including the subordinated unsecured term loan of $50 million for the term of 6-year.

The group intends to utilise the term loan to pay down senior debt and provide the Group greater funding flexibility. It was further informed that this new arrangement keeps the company’s cost of funds unchanged.

Outlook: Fiscal Year 2019 full results are scheduled to be released by the company on 14 August 2019. The Group expects its EBITDA (before significant items) to be at the lower end of its earnings guidance of $230 million to $245 million. Significant items after tax for FY19 are reportedly expected to be a loss of around $370 million, inclusive of $355 million recognised in the first half.

Appen Limited is an innovative information technology company that is globally known for its development of human annotated datasets for machine learnings and artificial intelligence. The stock can currently be spotted trading close to its 52-week high of $29.700.

Founded in 1996, Appen reported a total revenue of $364,289k for the financial year ended 31 December 2018 compared to 2017 revenue of $166,571k. The top-line growth reflects the integration of newly acquired Leapforce which took the content relevance division to grow by 148% in FY18 beside strengthening the overall financials of the company. Its reported statutory EBITDA was $68,080k, representing a 206% increase over 2017 including one off costs and expenses relating to the Leapforce acquisition. Appen’s business model is based on strategic imperative of investing in new technology to reduce costs, improve margins and sharpen responsiveness to evolving customer requirements.

Currently, the company aims of broadening its customers’ base and establishing a presence in China to participate in the dramatic growth of artificial intelligence and machine learning take-up in that country. Appen is, therefore, investing judiciously to participate in this opportunity with a new office and staff in Shanghai that bring us closer to customers.

Following Leapforce acquisition in 2017, the company has recently closed the acquisition of Figure Eight Technologies, Inc based in California, United States. APX last traded at $27.990 on 28 June 2019.

The very famous infant milk formula company Bellamy’s Australia Limited bagged a series of approvals from State Administration of Markets Regulations (SAMR). The approvals include the regulatory consent to produce Bellamy’s new branded formulation-series at its dairy facility in Toora- the ViPlus.

These approvals also accelerates the company’s strategic plan to enter China’s offline channels and establish a tiered-product portfolio. Initially, the company focuses on the channels’ premium segment in Tier 3 and 4 cities. Whereas, Bellamy’s existing organic series, which remains pending for SAMR approval relating to its production at Camperdown Powder, plans to target Tier 1, 2 and 3 cities. Also, the group has received solid feedback from sub-distributors primarily for the Bellamy’s ‘made in Australia’ status.

CEO Andrew Cohen stated that Despite facing numerous challenges in 1HFY19, Bellamy’s business has evolved with the portfolio of winning products that incorporates best of science with best of organic. He added that this change coupled with already established strong brand image would set a new platform for long-term growth and higher levels of investment in China.

Outlook: For Fiscal 2019, Bellamy’s expects its revenue to be within the range of $275 to $300 million allowing for slower trading with an expected return to stronger performance from March 2019. Normalised Group EBITDA is projected to be 18-22% of revenue, reflecting increased investment and the lower forecasted revenue.

Also Read: Is Bellamy’s Gearing Up To Touch High Levels Once Again

Waste management company BINGO Industries completed the complementary acquisition of Dial a Dump Industries (DADI) in March 2019, which is stated to be the catalyst for its network reconfiguration in New South Wales.

This acquisition transaction has reportedly increased BINGO’s ability to compete against multinational, operators in C&I collections through securing C&I post-collections recycling and disposal assets along with the addition of collection fleet of 55 trucks.

However, the group has downgraded its earnings guidance for Fiscal 2019 due to faster than anticipated softening in multi-dwelling residential construction activity and no rise in prices during 1HFY19 contrary to the company’s expectation. BINGO now expects its FY19 underlying EBITDA to be broadly in line with the previous year compared to its original guidance of 15%-20% growth in underlying EBITDA for the fiscal year ending 30 June 2019.