The company operates its downstream graphite business, EcoGraf project in Western Australia, through which it plans to produce spherical graphite for batteries (lithium-ion) by applying an environmentally friendly process. Also, the company intends to bring scalable mining projects online for the continuing supply of graphite via its upstream business, TanzGraphite in Tanzania.

The company has recently released its activities and cash flow report for the quarter ended 30th September 2019 on the ASX, highlighting significant developments across all its key business areas, that are discussed below:

Kibaran progressed with the debt financing activities at the development ready Tanzanian natural flake graphite project, Epanko Graphite Project during the quarter. The company held meetings with KfW IPEX-Bank in Germany to assess commercial due diligence activities for the Untied Loan Guarantee process, targeting total project debt finance of up to USD 60 million.

Kibaran made substantial progress at its Kwinana-based EcoGraf Battery Graphite Project during the quarter, reporting the following developments: 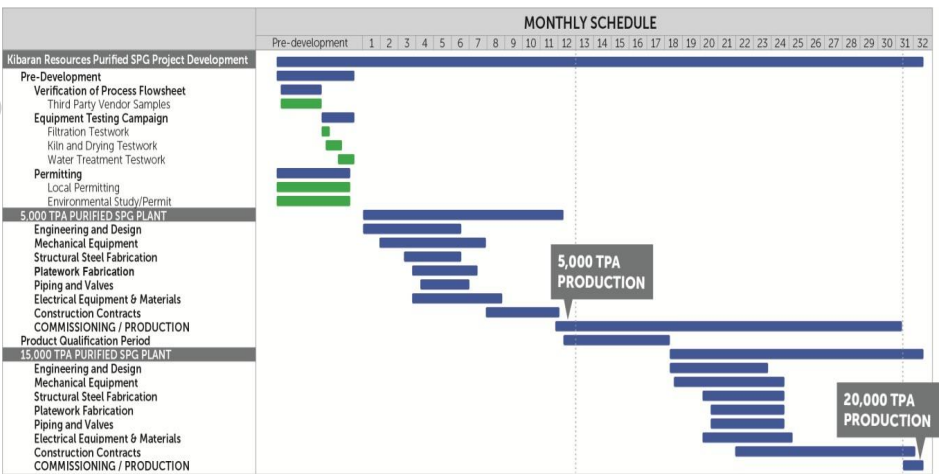 The German Government announced support for three battery cell alliances during the quarter to support a battery industry in Europe and to reduce automobile manufacturers’ dependence on Asian markets. The company notified that investment is underway across the globe to transition towards renewable energy for vehicle and industrial applications.

During the quarter, the company continued to engage with community stakeholders, to actively work on fostering and building constructive relations. The company reported the following community development activities:

Update on Demand and Price

Kibaran recorded a positive long-term demand for battery (spherical) graphite with EV penetration rates rising from 2 per cent in 2018 to 25 per cent by 2025, needing about 800,000 tonnes of spherical graphite, over six times the volume currently produced.

The company noted a strong demand for battery graphite from automobile and lithium-ion battery manufacturers in Europe, South Korea and Japan, who are seeking to diversify battery mineral supply chains to incorporate an environmentally responsible, alternate supply of battery graphite that lowers their dependency on Chinese supply and the associated environmental impacts.

Kibaran released an investor presentation detailing its recent developments and an updated website during the quarter. The website was updated to reflect the move towards downstream graphite processing.

The company has recently proposed to change its name to EcoGraf Limited (reserving its ASX code) to reflect its focus and strategy of, high-quality spherical graphite products. The company mentioned that the EcoGraf trademarks have been successfully registered in Germany, Australia, Japan, China, Korea and the USA.

Kibaran used $1.17 million in operating activities during the quarter and reported a cash balance of $1.42 million at the end of the quarter. The company has estimated a cash outflow of $850k for the next quarter, with $250k likely to be spent on exploration and evaluation activities.

The company also completed a share placement to raise $1.3 million during the period via placement of fully paid ordinary shares at an issue price of $0.09 per share. The placement was strongly supported by Kibaran director John Conidi and major shareholder Mitsubishi UFJ Financial Group Inc.

One can infer that Kibaran is on track to become a preferred partner for the long-term supply of eco-friendly, high-quality, responsibly produced spherical graphite products to customers in both established and emerging global markets.