The primary market has recently seen a lot of buzz in Australia, with almost every new IPO being cheered by the investors. In a time when there are already plenty of options in the secondary market, the investors are also keeping an eye on the new entrants.

Some of the ASX-listed companies that have recently entered the markets and were well received by the investors are: Douugh Limited (ASX: DOU), Dynamic Drill & Blast (ASX:DDB) and 4DMedical Limited (ASX:4DX).

Launch a successful IPO is more than just the fundamentals of the underlying business and the related valuations. To enter the secondary market, the “timing” also needs to be taken care of, in order to receive a high response from the street.

One of the main reasons for the successful listing of a number of IPOs recently has been the time during which they are entering the market. During the initial phase of the pandemic, most of the companies restricted themselves to enter the markets amid high negative sentiments and panic across the board.

Now, the fear is almost at the sidelines as reflected by indices, trading at 8-month high. Investors are also looking for newer opportunities, and it is probably the right time to capitalise on these changed sentiments.

Douugh is the only listed neobank in Australia as of now. The whole neobank space has been buzzing for a while now, which is disrupting the traditional business model of banks. Douugh uses data-driven technologies like artificial intelligence and machine learning in an attempt to make the financial lives of the customers a lot easier and simpler.

Douugh entered the market with an issue price of $0.03, and this low price helped investors to gain multifold return in the coming days. On the listing day itself, the stock closed with more than 100% gain. Fast-forwarding to mid-October, the stock was already up by a whopping 1500% from the issue price. Douugh shares last traded at $0.290 on 20 November. 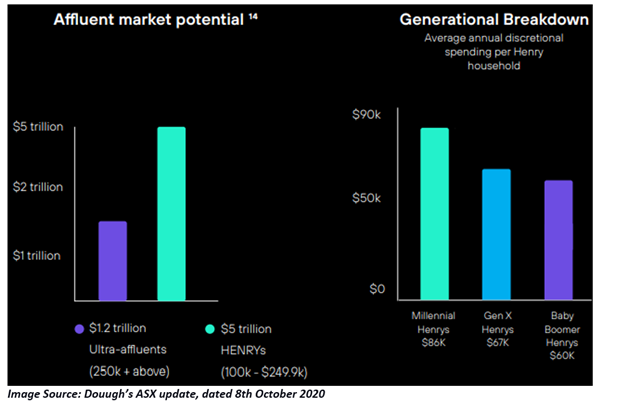 The company has recently entered the US markets with the launch of its app, tapping one of the fastest-growing segments in the US; HENRY’s (High Earners Not Rich Yet) and ultra-affluents. Douugh will be using Google’s ad binding platform, powered by AI to target potential customers. It is also optimistic on its launch of Bills Jar feature, one of a kind features, linked to a dedicated virtual card which flags all the upcoming bill payments and subscriptions of the user.

Currently, the company is making money through interchange and deposits but plans for other revenue streams in the future like monthly subscription, affiliate commissions, foreign exchange etc.

ALSO READ: How the only listed neobank Douugh faring against private players?

Dynamic Drill & Blast is in the business of supplying drilling and blasting services to the mining and construction companies. The company focuses on the miners who have projects in the commodities sector, including iron ore, lithium and gold. The company has a decent pipeline of medium to long term projects; however, it also undertakes short term projects.

The company entered the market with an oversubscribed IPO and raised $5 million. From the net proceeds, approximately $2.83 million would be used towards the purchase of additional plant and equipment. Repayment of debt up to $0.5 million would also be made through the proceeds. It also plans to use $1.95 million towards the working capital/corporate overheads.

The company has delivered a decent 10% return from the listing price of $0.05.

Recently, the company came out with its quarterly report, and current operations of the company include FMG’s Eliwana Rail Project Package 3 and Galaxy Resource’s Mt Cattlin Lithium Spodumene Project. A new contract with WBHO Infrastructure Pty Ltd has also been signed to make provision of drilling and blasting services.

The company closed the quarter with $3.9 million of cash position. Approximately $6.1 was reported to be the outflow from operating activities which represented payment of employment and operating costs. The inflows of $7.3 million were reported, mainly on account of receipts from customers.

The entire healthcare space has been on the radar of investors during the pandemic, and 4DMedical Limited just hit the sweet spot. The IPO was launched back in August and successfully raised a total of $55.79 million, after issuing 76.43 million new shares at $0.73 per share.

This medical technology is notching up its operations and now focusing on the commercialisation of its patented respiratory imaging platform. The company’s XV Technology™ helps in a higher level of diagnosis with respiratory diseases and aids physicians to treat it better. The technology uses complex mathematical models and algorithms to convert sequences of X-ray image into four-dimensional quantitative data, helping in the objective measurements.

According to the latest quarterly report, the Therapeutic Goods Administration has approved the company for offering XV LVAS platform for commercial sales in Australia. The company’s cash balance stood at $48.09 million as at 30 September 2020, while the net cash outflow from the operating activities was reported at $4.46 million.

The company also benefited from the federal government’s JobKeeper payment scheme, during the quarter and received $0.24 million in subsidies.