Galilee Energy Limited (ASX: GLL), an oil and gas explorer, provided an operational update on 15th May 2019. The company mentioned that it had successfully drilled the lateral section of Glenaras 15L, a prospect of the companyâs wholly-owned and operated Glenaras multi-lateral pilot programme in Galilee Basin.

The Glenaras 15L well will now mark a suspension following the end of the drilling programme (amid pending completion work with an electric submersible pump) and had intersected circa 295 metres of net coal from the R3 seam primary target. 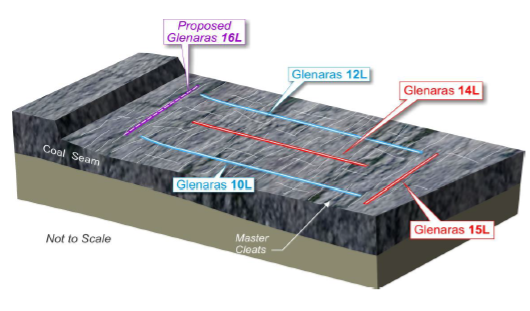 The successful drilling outcome further progresses the drilling programme in a significant way, and the company mentioned that its team executed the drilling work safely, delivering the results on the scheduled time and within the budget.

Galilee had executed two of the three wells planned by the company in the drilling programme, which signifies substantial progress of the pilot-Glenaras multi-lateral programme.

As per the companyâs estimation, the coal represents a cutting revelled cleat, and is of excellent quality. The company prepared to mobilise Easternwell Rig 103 to the third well location identified as Glenaras 16L. GLL intends to target the Glenaras 16L to spud on 17th May 2019 and aims to drill down through the R3 seam to land within the primary target.

The trajectory of the third well is planned to be perpendicular to the Glenaras 14L, and the Pilot drilling is scheduled to take an estimation tenure of 6 weeks. The aim of the Pilot drilling programme undertook by the company is to bring the lateral wells in production, by early July 2019 post the necessary completion. The company estimates that it would take three months for material gas production rates to be observed after a production halt. The two existing wells identified as Glenaras 10L and Glenaras 12L will require to shut in to facilitate the drilling, and a full drawdown will be restored once the company completes the drilling and completion operations.

The estimated cost of the program is under the current cash position of the company and is estimated to be around $8 million.

Previously, Galilee had successfully drilled the Glenaras 14L, which resulted in an intersection of around 240 m of net coal in the well through the R3 seam primary target.