The home currency is facing some pressure against a slight recovery witnessed in the United States dollar with AUD/USD facing strong resistance around USD 0.780.

The United States Federal Reserve (U.S. Fed) cited that the U.S. economic activity and employment had moderated in recent months during its meet yesterday. The comments from the central bank seem to have uplifted market sentiments around the U.S. dollar, putting cross pairs in some trouble.

However, while the United States Federal Reserve choose to keep the interest rate and monthly bond purchase unchanged, an optimistic opinion after a while uplifted the dollar index.

In response, the recovery in the home currency, which has been slowed for a while faced further pressure, prompting it to break a range; however, prices recovered and once again moved backed to the previous range.

Also Read: Three currency pairs gaining ground, what are chartists looking at in 2021? 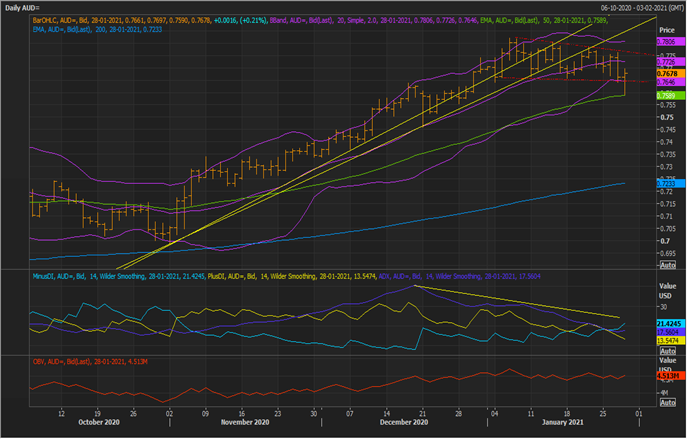 On following the daily chart, it could be seen that AUD broke down of the downward sloping trading range (marked with red lines), leading to a volatility breakout towards the downside with prices slipping below the -2 Standard Deviation of the 20-day simple Bollinger Band®.

On applying and analysing some technical indicators, it could be seen that ADX is showing a sharp divergence against the recent price action, which could be an early signal that the uptrend is exhausting. Meanwhile, the minus DI is moving above the plus DI, suggesting that volatility is now more towards the downside.