Several blockchain-powered projects, with respective native tokens, have entered the cryptoverse. ETH, which is Ethereum’s native token, leads all other altcoins. Ethereum also provides blockchain services to many NFTs and DApps, which is one of the reasons why it ranks second only to Bitcoin.

However, there is one blockchain which claims to be the world’s “lightest” blockchain -- Mina Protocol. The Mina network claims to have a mechanism that does not allow the blockchain size to increase. Let’s explore in detail.

How is Mina blockchain different from others?

The network, like Ethereum, provides smart contract and decentralised app services. Mina, however, is said to be lighter than both Bitcoin and Ethereum. The network states that every new block produced in the network is followed by a “zk-SNARK”, which stands for Zero-Knowledge Succinct Non-interactive Argument of Knowledge. In this arrangement, the nodes can store only SNARK, enabling lesser load on the chain.

The Mina blockchain highlights that it has a fixed size of nearly 22KB as opposed to other networks whose size increases with time.

The network has decentralised apps in the form of zkApps. Here, the data is owned by the user, unlike in a centralised setup. Mina also claims security with respect to 51% attack, a situation where majority token holders of the network can manipulate it.

MINA serves as then native token to the Mina blockchain. The MINA price trajectory resembles that of other comparable tokens including ETH and SOL. The year 2022 has not been rewarding for tokens linked to blockchain networks.

As of writing, the MINA token is trading at nearly US$0.8, with a 10% drop in price over the past 24 hours. Bitcoin and Ether, two of the biggest cryptoassets, are also trading in the red. This could be one of the reasons behind a sharp decline in MINA and the wider cryptoverse.

The market cap of MINA stands at over US$450 million, making it one of the top 100 assets. Notably, ETH ranks second in the list and other blockchain network tokens like SOL and ADA feature in the top ten.

MINA has lost enough value this year. It started 2022 with a price of nearly US$3.5 and surged to over US$4 in the first week of January. However, in the following weeks, MINA continually lost value. A limited rally was seen between mid-March and early-April, but even this could not sustain. 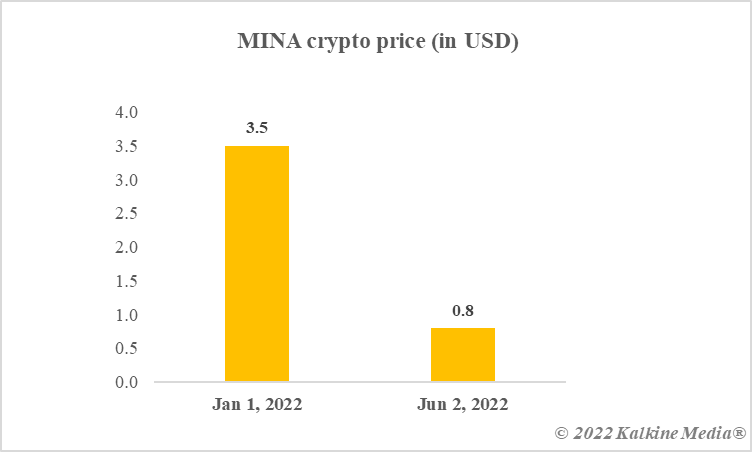 Mina provides blockchain services to developers, promising a fixed-size chain to keep it light. MINA is the project’s native token and this year it has had a ride comparable to that of other tokens like ETH. Starting the year with a value of nearly US$4, MINA is now trading under US$1 – a plunge that should remind enthusiasts of the risks that prevail in cryptos.