There are over 200 vaccine candidates under development for COVID-19. The major categories of vaccines consist of vector, inactivated, nucleic acid-based (DNA & mRNA) and recombinant protein-based vaccines.

Amongst the handful of candidates in late-stage development, Russia’s Sputnik V has probably been the most discussed. In this article, we would look at the vaccine and the latest developments around it.

Sputnik V, an adenovirus vector-based vaccine, is being developed by Gamaleya Research Institute, in collaboration with RDIF. At present, the vaccine is being evaluated under Phase III clinical trials.

On 11 August 2020, the Russian Ministry of Health registered Sputnik V, making Sputnik V the first registered vaccine for treating coronavirus on the market.

Adenovirus belongs to a group of viruses that infect the lungs, urinary tract, lining of the eyes, and the nervous system. The gene that causes infections is removed from the adenovirus, and another gene containing the protein code of a different virus is inserted. While the new gene is safe, it induces a response from the immune system. The system produces antibodies which help protect from the viral infection.

Do Watch: Global Race Continues against the COVID-19 Vaccine; AstraZeneca Under the Spotlight

Kirill Dmitriev, CEO of Russian Direct Investment Fund (RDIF), highlighted that Sputnik V has proved highly effective after being tested on 16,000 volunteers. In Phase II, the vaccine proved 100% effective. In Phase III, another 16,000 patients were vaccinated, and the outcome reflected that the vaccine was extremely effective. 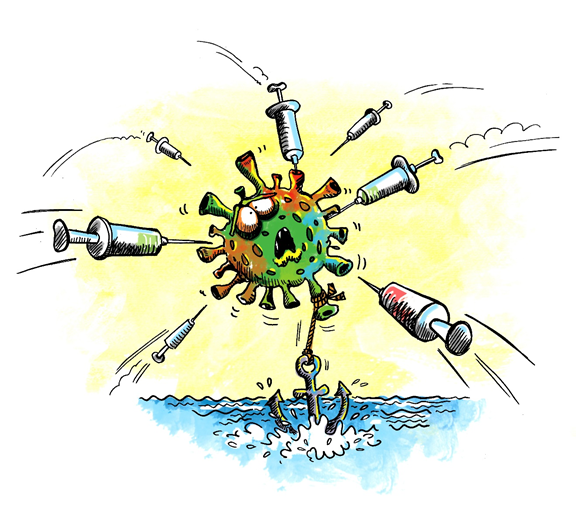 On 30 October 2020, RDIF announced that it had pre-submitted initial documents to Brazil’s regulatory agency, ANVISA. As part of the technology transfer deal between União Química Farmacêutica Nacional and RDIF, Sputnik V vaccine batches will soon be launched in the South American country.

RDIF had submitted applications to the WHO on 27 October for accelerated registration and prequalification for its vaccine. The prequalification program evaluates the candidate’s safety and efficacy.

The accelerated registration will help bring Sputnik V in the market quickly and thus support global endeavours to prevent the COVID-19 disease.

Supply Agreements with Argentina and Peru

The delivery of the vaccine to Latin America is expected to start in December 2020. Mr  Dmitriev further stated that the supply could be influenced by regulatory issues related to the vaccine’s approval. Recently, RDIF has submitted for Brazilian clinical trials and expects to get the permit in December 2020.

Based on these data, RDIF projected that the monthly production of Sputnik V could reach 10 million by December 2020 end.

Kirill Dmitriev also stated that the vaccine would be produced in countries like Brazil, India, China, and South Korea. He assured that there would be a huge supply of COVID-19 vaccine in December.

Besides, several doses of Sputnik V have reached Venezuela with the first batch shipped in early October.

In India, RDIF and Dr Reddy’s laboratories got new approval to perform late-stage clinical trials in India for the Russian vaccine for the treatment of COVID-19 patients. With this new agreement, India would now perform an adaptive Stage II and Stage III of the human clinical trial that would include 1,500 participants. As per the agreement, Dr Reddy’s would conduct the trial, and after the approval, the vaccine would be distributed in other parts of India.

Mindset Towards Sputnik V in Russia

Confidence level in the Russian-produced vaccine against vaccines produced in other Countries: 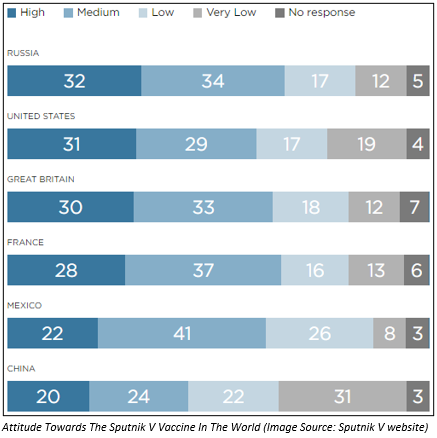 Challenges Faced by the Russian vaccine

Also, in September, questions were raised over the efficiency and safety level of Sputnik V. There was a buzz in the market that one out of seven COVID-19 patients that received the vaccine had side-effects. Mikhail Murashko, the Minister of Health of the Russian Federal, stated that nearly 14% of the patients receiving Sputnik V had side-effects. However, he confirmed that the vaccine is still safe and equivalent to other candidates.

Following the launch of Sputnik V, the vaccine has received massive criticism from the Western countries and companies that are engaged in the development of COVID-19 vaccines. Developed by Gamaleya Center scientists, Russia received huge attention & expressions of optimism from several nations. It also received requests for 1 billion doses of the vaccine.

Kirill Dmitriev, after the publication of Phase I and Phase II clinical trials results in The Lancet, summarised the answers related to the vaccine. Some of the questions were:

Kirill Dmitriev concluded the session stating that Sputnik V is built on a safe and well-proven existing platform. The vaccine received its emergency use registration in full compliance with Russian law and procedures. Further, several actors in the western countries are also considering early emergency use registration, but for vaccines developed on unproven novel methodologies.