Australian banks to face possible defeats due to COVID-19

The most powerful Australian banks are set to face potential cash losses due to their crisis response caused by COVID-19.

The novel pandemic has shown to be the biggest financial challenge that the Australian nation has ever experienced, hence why the lenders decided to temporarily halt loan payments to restore the economy.

Bankers estimated that the total sum of frozen debt is worth more than A$240 billion in total. However, A$7 billion is the amount that might not be returned before next year, as many borrowers opted to prolong the debt until January 2021 or let it expire.

The estimated number of those customers that took out loan delays for six months is more than 780,000. Customers had mostly borrowed money for paying out mortgages or for boosting small businesses, apart from other credit repayments.

High demand for freezing mortgage payments comes as no surprise as Australians are one of the very few nations that need to pay as much money for purchasing a property.

DO READ: ABS Surveys Australian Households to Measure the Impact of Covid-19

Who are the borrowers?

Australian Banking Association’s (ABA) media release stated that almost 400,000 landowners became eligible for mortgage delay payments. Estimated 170,000 businesses that experienced difficulties during the coronavirus pandemic have been granted loan deferrals, as well as 37,000 customers that needed the temporary halt for other reasons, such as personal loans or a credit card debt.

ABA’s CEO Anna Bligh said that the Association had never experienced as big of a contact-tracing service as it did during these unprecedented times – the ABA needed to hire additional 5,000 people whose job was to follow up with the borrowers.

Only four out of five people have answered the calls from the ABA, whose contact tracers urged borrowers to start repaying their debt, or even sell their land if the debt is too unbearable. Some even mentioned the possibility of accessing early super payments as a way of repaying the loan.

Small and middle-sized businesses have faced the worst consequences caused by COVID-19, which is why they turned to cheap loan providers. They borrowed an additional A$45 billion, as well as having an extra A$6 billion cost due to borrowing even more money after previously getting loans. 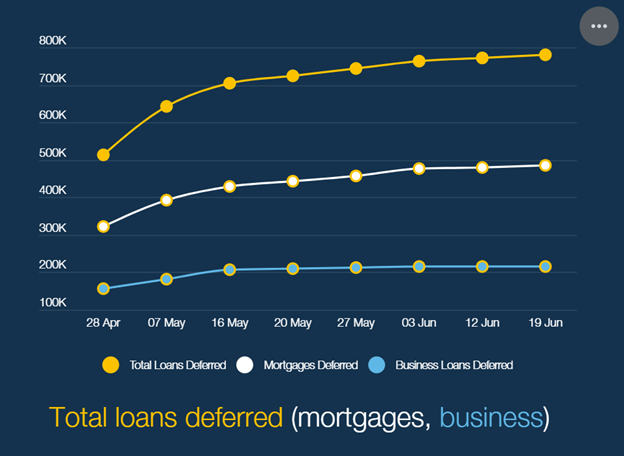 The infographic shows the total number of loans that were delayed. (Source: ABA)

How are the banks coping it?

Ms Bligh explained that the Australian banks were successful enough to afford that kind of a response, as it was essential to allow people to spend money on the necessities rather than paying loan debts. By providing loan delays during Australia’s recession, the economy was meant to aid the Australian economy as a whole.

However, some experts argue that banks are only showing their courageous side, whereas they seem to be more anxious than what they show – after all, a lot of cash is at stake.

DID YOU READ: Banks need A change in Operating Strategy, straight from the horse's mouth- NAB

The biggest challenge banks are going to face in the future is to calculate all the possible risks if even more borrowers decide to prolong their debts.

Bank of Queensland (BoQ) was the last Australian bank that analysed the total amount in deferred loans they provided. A$5.5 billion is still waiting to be repaid to BoQ, while the bank put A$175 million aside to balance out the capital.

MUST READ: Commonwealth Bank economists join the 'Recession is Over' bandwagon

IN CASE YOU MISSED: Westpac to pay A$1.3 billion in fines for misconduct

DO READ: What is next for ASX 200 listed NAB share price?

According to the provided data, borrowers owe A$222 billion of the total A$240 billion in rescheduled loans, but A$7 billion from that debt are expected to be spoilt.

How has financial hardship affected Australians?

According to the same report about deferred loans brought by The Australian Prudential Regulation Authority (APRA), it was found that 650,000 Australians applied to take out their superannuation as a response to their monetary hardship.

However, only 150,000 Australians were allowed to receive the payments, resulting in A$1.3 billion of superannuation taken out – an average compensation was estimated at ~A$8,000.

Superannuation Industry (Supervision) Act from 1993 offers early super payments to be released to all eligible superannuation holders in the period that suits them the most.

Super compensation has been paid within 1.6 days on average.

Additional investigation will be held to check if certain people behaved fraudulently and took out their super for reasons that did not apply under the Act.