Base metals prices are on an upsurge in the international market amid infrastructure demand push from China and industry estimated deficient in the supply chain. While nickel prices are knocking the heaven doors, the market is now turning its attention towards copper.

Copper or Dr copper- known for its use in every sector of a developing and developed economy, is gaining market attention amid predicted consumption growth in the coming years. However, the recent trade spat between the worldâs most significant economies- China and the United States has knocked out the green from the metal.

The recent devaluation of $CNY has dragged down the prices slightly in the international market; however, the industry experts still believe that the base metal would witness a strong demand surge over the years ahead.

Global Copper Scenario: Australia is the seventh-largest copper producer in the globe and is the third-largest exporter of copper ores and concentrate, with the key consumer market being China and the United States. The Australian Department of Industry, Innovation and Science (or DIIS) anticipates that the growth driven by consumption would outpace the production over the coming years.

The estimated growth would support an annual growth in prices of 6.1 per cent by 2021, and the prices would reach the level of US$7,750 a tonne.

Global Consumption: World copper consumption is estimated by the DIIS to underpin an annual growth of 2.4 per cent till 2021 to stand at 26 million tonnes. The DIIS predicts that the demand push from expanding markets, specifically China would offset the impact of slower economic activities elsewhere, which in turn, would support the copper prices over the years ahead.

Chinaâs government stimulus over the infrastructure, electricity generation and distribution infrastructure would support the copper prices, and along with that, the DIIS estimates that the United States, Germany, and India would increase their respective consumption by 85 thousand tonnes between 2018-2021.

The EV angel: The advancement in technologies such as the electric vehicle could stimulate the refined copper demand, as an EV uses about four times more copper as compared to an internal combustion engine (or ICE). China again bags the number one spot for EV sales and consumption, and as per the data, the EV sales in China averaged 6.2 per cent of all vehicle sales in January 2019 and March 2019 quarter.

The higher penetration of EV and battery push from China could provide cushion to the copper prices.

The Risk factor: Despite, higher growth anticipated by the industry experts, copper contains industrial risk. Copper prices are tied to the industrial production and overall global economic growth, and the dark clouds of the U.S-China trade dispute still hover above the copper prices, and investors should dig out deep for events impact and the long-term impact of the U.S-China trade war prior to making any decision on mere forecasts. 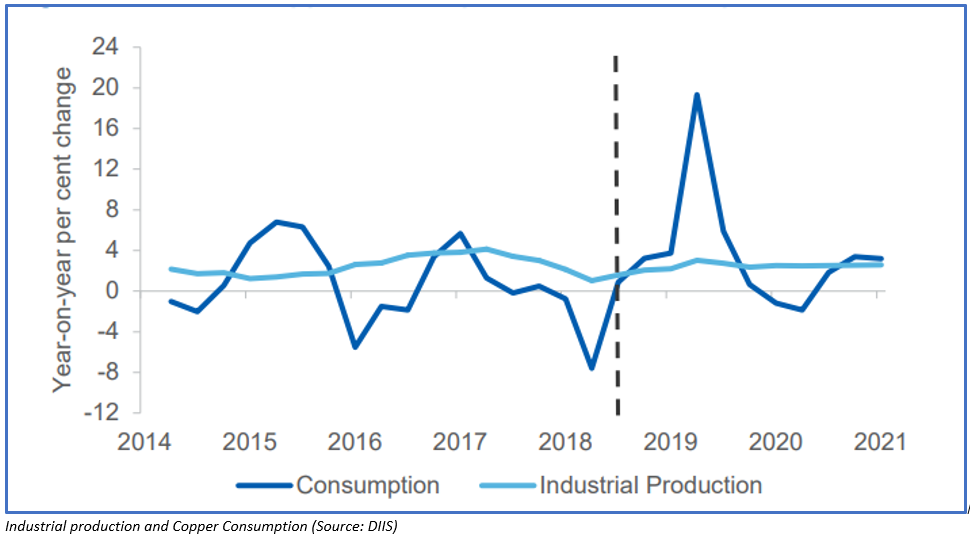 Global Production: The Australian DIIS estimates the global production of copper to grow modestly in 2019 before elevating in 2020. As per the DIIS, the worldwide mine production is anticipated to grow at an average annual rate of 3.3 per cent to stand at 23 million tonnes in 2021 from the current production level of 21 million tonnes (in 2018).

The deficit in the global market is estimated by the DIIS despite the new capacity addition from new projects coming online. The Quantumâs Cobre Panama Mine, which contains the production capacity of 340,000 tonnes was anticipated by the DIIS to reach 80 per cent capacity during the first half of 2019.

The additional capacity would also be supported by the expansion in Toquepala mine in Peru, and annual production from the site is anticipated by the DIIS to inch up by 52 per cent to stand at 258,000 tonnes.

However, the production loss from Indonesia and Zambia amid disruptions in operations due to adverse weather conditions could offset the new addition over the coming years. The maintenance shut-down of the Qinghai Copper mine in China is also estimated by the DIIS to support in the offsetting of the additional mine gains.

The Australian DIIS anticipates the production of refined copper to surge over time with an annual average rate of 2.7 per cent to reach the level of 26 million tonnes in 2021. However, the department also predicts that the shortage in concentrate supply and tightening environmental restrictions could limit future production growth. 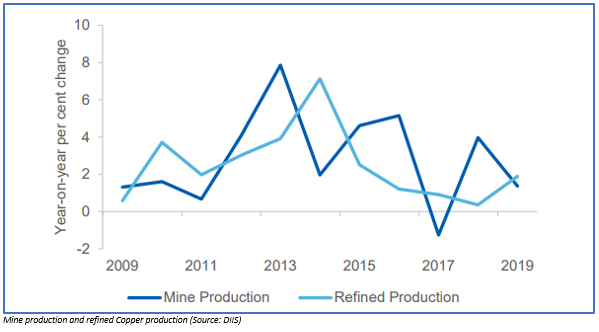 Australian Copper Scenario: The DIIS anticipates that the copper production in Australia would reach over 1.0 million tonnes in 2020-21 from the 2017-2018 production level of 941,000 tonnes, which in turn, would underpin an annual average growth of 5.8 per cent.

Higher Production to Drive High Exports Revenue: Australian copper export earnings are anticipated by the DIIS to inch up from the 2018-2019 estimated level of A$9.5 billion to A$12 billion by 2020-21, which would underpin an annual growth of 13 per cent.

While the global demand is anticipated to surpass the global consumption, the Australian miner- Chase Mining Corporation Limited (ASX: CML) is inching up the production capabilities to cash-in the predicted increase in copper and nickel prices.

CML or formerly TopTung Limited is an Australian publicly trading base metal miner, which is engaged in the acquisition of high prospective tenements for mineral exploration activities. The flagship asset of the company is Torrington Tungsten and Topaz project, and CML holds two exploration licences, namely, EL 8258 and EL 8355 over these prospects.

Beginning of Drilling activities at Lorraine: In an announcement made public by the company on 7 July 2019, CML mentioned that the companyâs drilling contractor- Chibougamau Diamond Drilling Limited (or CDD) mobilised a drill rig at the Lorraine Project site to commence the planned diamond drilling within next two days.

As per the company, the 7-hole programme of 1,445m contains an additional contingency of 1,055m (2,500m total), which would be required, if the visual results warrant extra holes before the company receives the assays.

The first two holes of the drilling program are planned at easily accessible Lorraine Mine.

The planned section of the drilling at the Lorraine Mine are as depicted below: