Calima is engaged in investing in oil and gas exploration and production projects across the world, owning and operating drilling and production rights in British Columbia (Calima Lands). The companyâs core asset is situated within a liquids-rich sweet-spot of the Montney Formation in Northeast British Columbia, Canada.

The proposed pipeline has been approved under the permitting and approval process linked with bringing the Calima Lands into production in a cost-efficient manner.

The pipeline will connect the existing and future Calima wells to West 2 compressor facilities of Tommy Lakes Field which is situated immediately north of the Calima Lands and extends the closest, a most cost-effective tie-in to processing facilities and regional pipeline networks.

Tommy Lakes is a conventional condensate and gas field that produces from a reservoir in the Halfway Doig Formation overlying the Montney. The Tommy Lakes infrastructure has excess capacity, and Calima is in discussions with the field operator to find an optimal way to use that capacity in a way that delivers a benefit for both parties.

The proposed pipeline will run through the core of the Calima Lands, with a capacity to transfer up to 1,500 bbls/d of well-head condensate and 50 mmcf/d of wet gas.

The cost of procurement and installation of the pipeline has been estimated at about $17 million by the lead engineering contractor for the regulatory approvals process and project design - Trialta Projects.

The pipeline is expected to provide connections to main sales lines via North River Midstream Jedney facility (NGTL, Alliance and T-North). In addition, interconnects are being proposed to provide access to the proposed Woodside/Chevron LNG Facility at Kitimat and the Shell/Petronasâ LNG Canada Facility in the future.

Treatment of Gas and Liquids at Proposed Pipeline 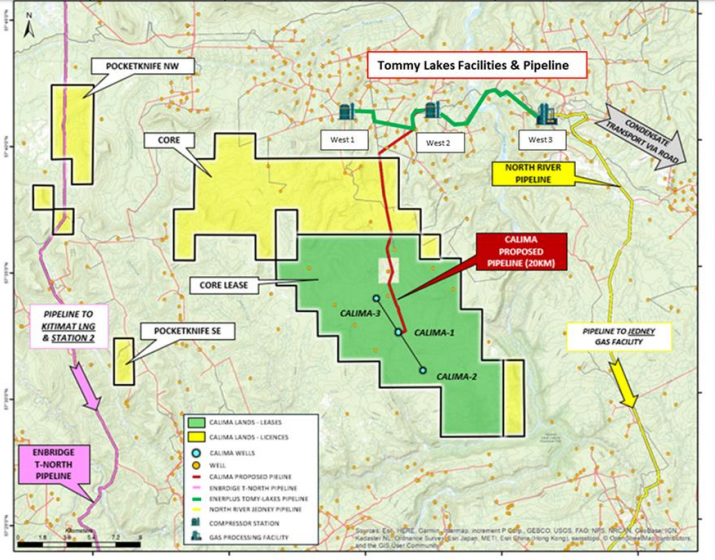 The company mentioned that the liquids and gas generated from the wells will be divided and assessed at the wellhead and the liquids will be reinfused back into the pipeline for transportation to the Tommy Lakes gathering system.

At the gathering system, it will be transferred into a North River Midstream sales line. The produced water will then be removed at the well-pad to be stored and recycled for future completions.

Moreover, the wet gas will be processed further at the North River Midstream Jedney plant, where additional NGLâs (natural gas liquids) retrieved during processing will be removed and transferred via pipeline to a liquidâs hub adjoining the Alaska Highway. The NGLâs that will be recovered during processing comprise additional condensate (C5+) plus lighter fractions like Ethane (C3) and Propane (C4).

As per a leading independent geological consulting firm with massive experience of the Montney Formation, the average liquid to gas ratio for wells in the Calima Lands should be around 45 bbl/Mmcf with about two thirds of total production being condensate.

The companyâs ongoing strategy is to attain necessary permits, approvals and authorizations required to finalise a Field Development Plan (FDP) that will pave the way for fast-track development of the Calima Lands for a joint venture partner or a future Operator.

The approval of the new pipeline is one of the key components of FDP placing the Calima Lands in a development-ready position, which follows the recent permit received by the company from the BC Oil and Gas Commission to construct a production facility at its Montney pad location.

Moreover, a 10-year continuation lease was also granted to the company over Calima Lands in October this year.

In conjunction with the production lease continuations and the production facility approvals, the pipeline construction permit enables a future joint venture partner to push development of the Calima Lands, secure in the knowledge that environmental approvals and key authorisations have been obtained.

The company is not planning to conduct any further development work until a Final Investment Decision (âFIDâ) takes place. FID will be contingent on securing funding via either the project financing facilities being arranged through sustained rising gas prices and/or the introduction of a joint venture partner.

Prospects for Long-Term Gas Pricing Appear to be Improving

The Calima Lands are rich in condensate that usually sells at a price near to West Texas Intermediate crude, however around 70 per cent of production from the Calima Lands is projected to be gas based on energy content (in terms of barrels of oil equivalent).

It has been observed that the gas prices in Western Canada (AECO) has been improving since April 2019, following a vast programme of infrastructure and pipeline investment. Moreover, when complete, the programme is likely to increase the market access for western Canadian gas by more than double.

These investments are already having an influence on forward strip pricing for AECO gas and are likely to make the project more attractive to potential partners and financiers once the FDP is finalised.