AF Legal Group Ltd (ASX: AFL) is an Australian law firm practicing family and relationship law. The firm gives advice to clients in matters related to separation, divorce, child matters and property. Apart from this, it also deals with ancillary services like wills, litigation and estates.

The company announced on 6th June 2019 that it would re-start its trading activities on the Australian Securities Exchange, w.e.f. 7th June 2019.

The announcement came in after a fruitful capital raising worth $5.9 million led by Bell Potter Securities gaining support from various existing and new investors. The first listed market capitalisation of the company on ASX was around $12 million.

AFL is deemed to be the first ever specialist family law firm to be listed on ASX. Grant Dearlove, company’s Executive Chairman, stated that the great investor support witnessed in the process of the capital raising process is a vital sign for the company to pave its path towards becoming the largest national family law firm in the country. He mentioned that the company’s market is worth $1.1 billion in revenue per annum at present. There is no peer, dominant or national player in the same sized markets, in contrary to the situation with the personal injury law.

On the trading side, AFL would be releasing its financial results for the full year till 30th June 2019 in August 2019, in accordance with the financial reporting obligations with the ASX.

However, it was mentioned that the company had a good trading period since January. The underlying EBITDA for the 11 months to 31 May 2019 exceeded 30% on pcp, based on the unaudited management accounts.

In March 2019, as per its prospectus, AFL had acquired the Mornington Victoria Family law firm Walls Bridges. The operational incorporation of this had been successfully implemented within a month and new file openings had been recorded to be strong. AFL stands by the belief that this would prove to be a great early validation of the company’s expansion strategy.

Towards its Operations and Growth Pipeline, and the start of the listing process, the company’s Board and Management had begun the execution of AFL’s “100 Day Plan”. The focus would lie on a number of areas like the 3 year corporate strategy, refining the strict debtor policy to better the cash conversion, Review of fee rates as benchmarked against competitors and client value, lay down specific strategies for the digital marketing model in new areas, launch development plans to better the referral growth to augment digital growth with the traditional referral streams, meet prospective Family Law businesses and stakeholder partners to look into expansion opportunities and make personal plans for and with the professional staff.

Besides this, the company had also eyed and engaged with counterparts that are well within its expansion model of its corporate strategy in various locations, like lateral hires, greenfield organic opportunities and acquisitions.

Let us understand the company better

AFL is an Australian law firm practicing family and relationship law. The firm gives advice to clients in matters related to separation, divorce, child matters and property. Apart from this, it also deals with ancillary services like wills, litigation and estates.

Founded by its current Managing Director Edward Finn in 2015, the company’s strategy is to be one of the largest players in the Australian family and relationship law firm sectors. The company was founded after finding an opportunity to build a disruptive law firm that would combine innovative client acquisition model with an accessible operating model and be cost effective in the large and fragmented $1.1 billion worth family law market.

To understand this case of a Reverse takeover/ merger, let us look at the events that have led to the final listing of the company:

On 19th December 2018, NAV’s (Navigator Resources) Board announced that it had proceeded with a conditional agreement to acquire the entire issued capital in AFL. The value of the combined company was said to be approximately $10.6 million, after execution of an NTA adjustment.

NAV intended to acquire AFL for $6.7 million while raising an amount between $4 million and $6.5 million in order to fund the costs, provide working capital and replay current debts.

AFL released an investor presentation report wherein it stated its financial overview over the years. The image below depicts the same: 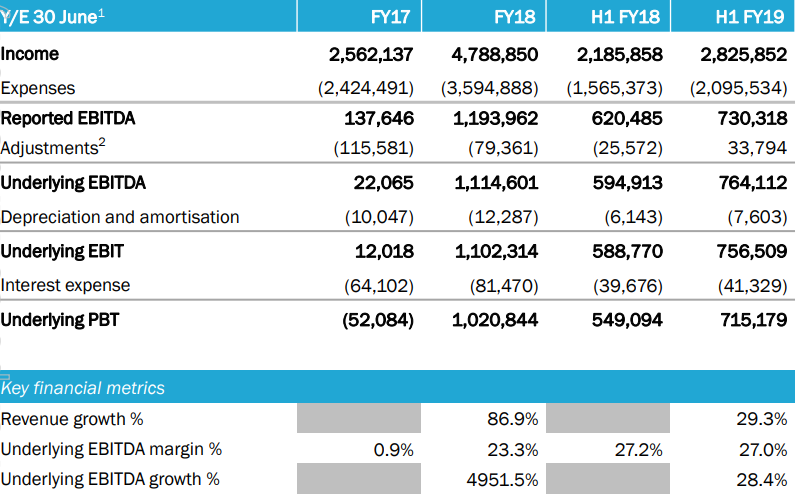 On 23rd May 2019, NAV had announced that it had received a conditional reinstatement letter from the ASX wherein ASX was ready to requote NAV to trading. Post this, NAV intended to go ahead with acquiring AFL, allot securities and close the prospectus offer.

Conclusion of Capital Raising and Acquisition:

Soon after, on 30th May 2019, an announcement came from the AFL group showing the change of name of NAV to AFL Group, stating that all conditions in the Share Purchase Deed had been ticked off, thereby completing the acquisition. The public offer and the consideration offer were hence closed. 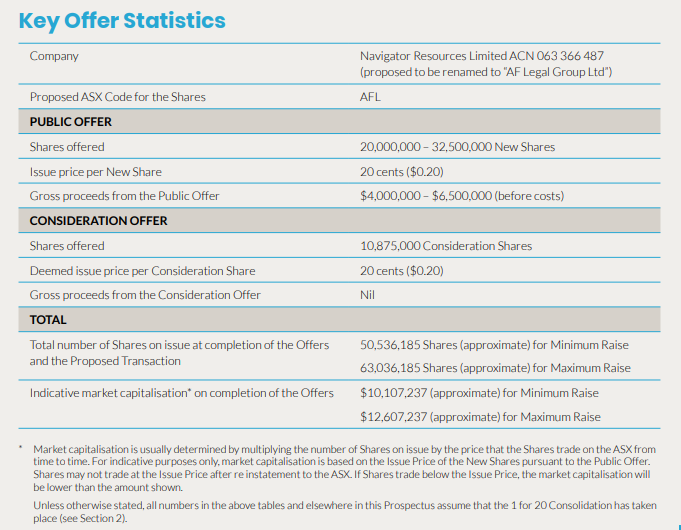 The company provided the relevant interests of the Proposed Directors, which is given below: