DuluxGroup Limited (ASX: DLX) is a provider of building products like coatings, adhesives and branded paints. The company got listed on the Australian Stock Exchange in July 2010.

Court Approval for Scheme of Arrangement: On 6th August 2019, DLX updated the market regarding its scheme of arrangement with shareholders securing approval from the Federal Court of Australia, wherein all the issued shares of DLX would be acquired by Nippon Paint Holdings Co., Ltd.

Under the terms of the scheme of arrangement, Nippon Paint would acquire 100% of DuluxGroup shares at a consideration amounting to $ 9.37 per DLX share. The record date of the scheme is 14 August 2019 and payments towards the scheme consideration are likely to be made on 21 August 2019. Meanwhile, on 06th August 2019, the company submitted a copy of the court approval with the Australian Securities and Investments Commission.

A metals & mining sector player, FE Limited (ASX: FEL) is in the business of exploring and developing minerals. The company was officially listed on ASX in 2005.

FEL further stated that after conducting 2 reconnaissance trips, areas of prospectivity were identified in most tenements. It had taken rock chips from several locations for initial tests. The company reported that Malachite was observed in gossan within the Hillside Group, with its focus now on the Hillside potential for gold, copper and base metals. Additionally, the company would receive an amount of $ 241,498 as a royalty payment, which is related to test mining conducted by Mineral Resources Limited (ASX: MIN) at its Deception iron ore mine in the quarter ended June 2019. 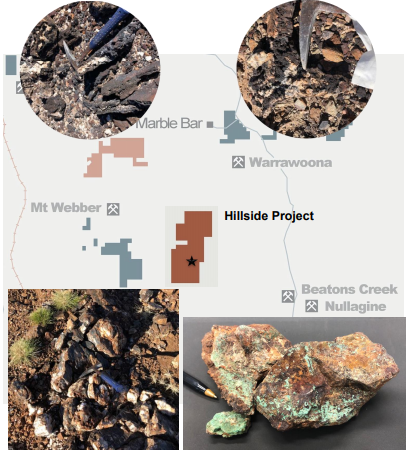 Universal Coal Plc (ASX: UNV) is engaged in the development and exploration of thermal and coking coal. It is majorly focused on coalfields of South Africa.

Coal Supply Agreement: As per a release dated 6th August 2019, the company inked a coal supply agreement with Eskom, which is a power utility provider of South Africa. The coal supply agreement has been executed for 100% of coal production at Ubuntu Colliery. Ubuntu after becoming operational would be the companyâs fourth operation to come online over a period of six years.

Under the terms of agreement, Ubuntu Colliery would be providing 1.2 Mtpa of thermal coal to Eskom. The first coal delivery is scheduled for November 2019, while the production build-up has a short period of six months. The new coal supply agreement would move the company closer towards achieving its target of annualised sales volumes to 9.6 Mtpa to the market by the financial year 2021.

Interest Change: Universal Coal made a submission with the ASX on 1st August 2019, highlighted that Carlo Baravalle, a Non-Executive Director of the company, has made a change to his holdings by disposing 100,000 (direct) CDIs at a consideration of A$ 0.28 per CDI. The change in directorâs interest was made on 8th July 2019.

Over a time period of five years, the company reported sales tonnage CAGR (Compounded Annual Growth Rate) of 61%, which has been fueled by combination of organic growth and timely, value accretive acquisitions, according to an investor presentation released on 30 July 2019. The company is in place to continue strong cash generation growth with limited requirement for external funding. 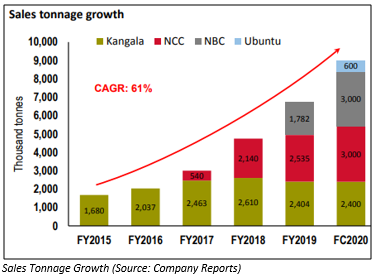 Aveo Group (ASX: AOG) is a real estate sector player, serving as an operator, owner and manager of retirement communities throughout Australia.

Strategic Review: Recently, the company with the help of a release dated 6th August 2019 updated the market with its Strategic Review process. AOG unveiled continued commercial negotiations between the company and Brookfield Property Group, together with its affiliates and their managed funds.

The company further stated that the Independent Board Committee is in discussions with Brookfield Property Group to reach a resolve regarding several matters, concerning the non-binding and conditional indicative proposal. Moreover, discussions are being held aimed at reaching a definitive agreement, resulting in a Scheme of Arrangement for a whole-of-group transaction. With respect to the price speculation, the company noted that the indicative cash offer price currently under discussion with Brookfield Property Group, together with its affiliates and their managed funds, is $ 2.195 cash in lieu of each AOG stapled security.

West African Resources Limited (ASX: WAF) is an Australia registered company, which is involved in the exploration of gold in Burkina Faso.

New Contractor Appointment: The company, on 6th August 2019, updated the market about the appointment of African Mining Services Ltd, which is a wholly owned subsidiary Ausdrill Limited (ASX: ASL), as the preferred tenderer for the open-pit mining contract for the Sanbrado Gold Project. The amount of contract is US$ 170 million for more than 5 years. The company also reported that for a deferred payment arrangement for up to US$ 10 million at a commercial interest rate, WAF and ASL would enter into an option.

Additionally, mobilisation activities are anticipated to begin in November 2019 before the start of open-pit mining in January 2020. It was also mentioned in the release that the scope of work is inclusive of drill and blast, site preparation, maintenance works, and load and haul. Construction work at the Sanbrado gold project is progressing on budget as well as on time. First gold from the project is expected in mid-2020.

A Look at June 2019 Quarter: The project expenditure for the quarter stood at A$ 51.1 million with administration cost amounting to A$ 0.7 million. The cash and cash equivalent balance of the company stood at A$ 79.3 million at the end of June 2019 quarter. Additionally, it had drawn an amount of US$ 75 million under its Taurus finance facility of US$ 200 million. The following picture provides an idea of cash flows related to operating activities for the June 2019 quarter: 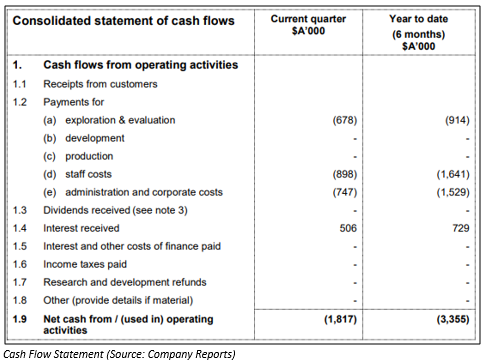