The below-mentioned material stocks were up on ASX during today’s trade. Most notable among them is James Hardie Industries, which witnessed an increase of over 14% in its share price during intraday trade, owing to the strong quarterly results released early morning.

Leading manufacturer of fiber cement siding and backerboard, James Hardie Industries plc (ASX: JHX) has reported a net operating profit of US$90.2 million for the first quarter of FY2020. This was 13% higher than prior corresponding period, supported by the underlying performance of the operating business units.

Due to the higher net sales in the North America Fiber Cement and Europe Building Products segments, the total net sales of the company during the quarter increased slightly by 1% to US$656.8 million as compared to pcp. The gross profit of the company was also up by 5% to US$233.1 million. 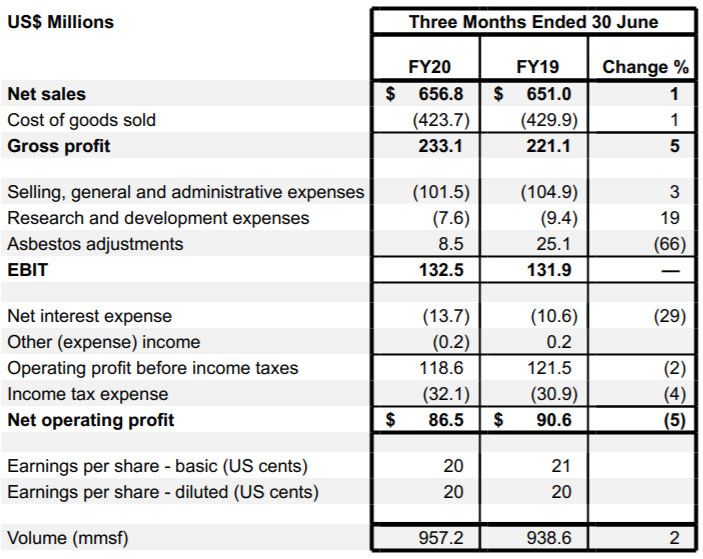 At the 2019 Annual general meeting held on 9 August 2019, the company’s Chairman Michael Hammes highlighted that in FY19, the company’s North America segment achieved 6% top line growth and EBIT margin of 23.1%, which is within the target range of 20–25%. He further advised that the company’s focus for fiscal year 2020 will be to return primary demand growth to its targeted range.

During 2019, the company allocated capital to position its North America manufacturing network for the future. The company also initiated the expansion project within its ColorPlus product line including equipment, land and buildings. This includes projects at its Peru, Illinois and Pulaski, Virginia plants, and a greenfield project in Massachusetts.

Bemis has a rich 160-year history and currently is a leader in flexible packaging with a particularly strong presence in the American regions. The company is listed in the US and has sales of around US$4 billion. Globally, Bemis has over 50 plants with some 16,000 employees in 12 countries.

With this acquisition, Amcor is expected to generate sales of US$13 billion, annual cash flow of more than US$1 billion and EBITDA of US$2.2 billion.

In the first half of FY19, the company earned a sales revenue of around US$ 3,166 million which was approximately 2.9% higher (Constant currency basis) higher than pcp. The company’s PBIT also grew by 1.9% to US$396.8 million, primarily driven by the growth from recently acquired businesses and strong cost performance. 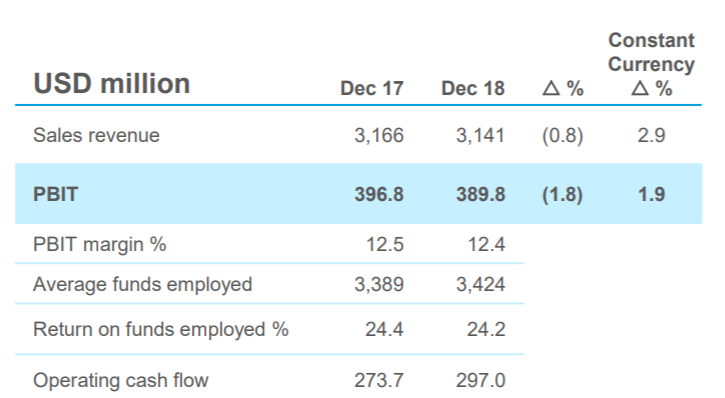 Leading provider of commercial explosives and innovative blasting systems, Orica Limited (ASX: ORI) reported 12% growth in its sales revenue for the half-year ended 31 March 2019. Driven by the strong performances across all regions, the company witnessed an EBIT growth of 20% as compared to pcp. 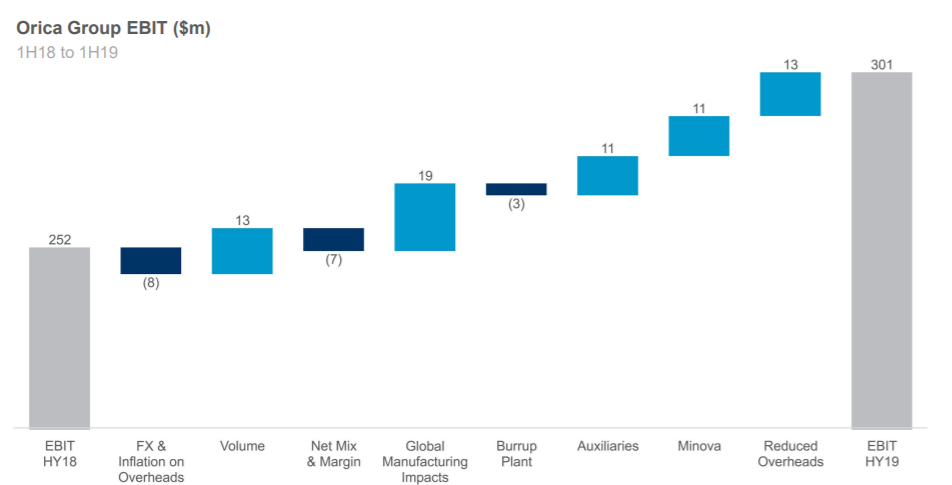 Australia’s leading construction material and building supplier, Boral Limited (ASX: BLD) entered into a property development management deed with Mirvac in relation to its Scoresby site in Victoria in anticipation of receiving approximately $66 million of EBITDA through to FY2026. In FY19 alone, the company expects to earn around $3 million in EBITDA through this deed.

Recently, Sumitomo Mitsui Trust Holdings became a substantial holder of the company by holding 58,915,250 ordinary shares with voting power of 5.03%.

In the first half of FY19, the company Net Profit after tax (NPAT) of $200 million, 6% down on pcp. However, the company’s Statutory NPAT increased by 37% over the period to $237 million.

For the half year period, the company declared an interim dividend of 13.0 cents per share which was 4% higher than pcp.

For Boral Australia, the company expects FY19 EBITDA to be broadly similar to prior year, while for Boral North America, it expects EBITDA growth of approximately 15%.

The company in its first half of FY19 reported EBIT of $119 million, significantly lower than $240 million reported in pcp, majorly impacted by Non-recurring Items.

In the half year period, the company’s intangible assets increased by $26 million mainly as a result of the impact of foreign currency translation of non-A$ denominated assets of $35m; partially offset by the amortisation charge for the half year. The company’s tax liabilities over the period, decreased by $17 million mainly due to tax payments of $14 million and the tax effect of $13 million on net movements in derivative hedging balances.