Alaska North Slope, one of the super basins with commendable historic production greater than 16 billion barrels (bn bbls) till date with remaining resources of 28 bn bbls, has shown optimistic resource estimation for XCD Energy Limited (ASX: XCD)- an Australian listed US focused oil exploration company. Post the announcement of the resource update on ASX, XCD share price witnessed an increment of 25%, a testimony to the positive sentiments among the investors.

Project Peregrine includes total 13 NPRA's leases located ~35km to the south of the Willow discovery presently being appraised and developed by ConocoPhillips. The NPRA leases has no extra expenditure but only annual lease rental of US$3 per acre per annum with most of the contract valid till 2029.

The review of Peregrine project has shown positive result of over 1.6 billion barrels prospective resources in the mean case, i.e. net entitlement after royalty in its maiden Independent Prospective Resources Report updated by the ERC Equipoise Pte Ltd (ERCE) – An international petroleum Reserves and Resources auditor with 40 years of experience in offering professional consulting services in upstream oil and gas industry. 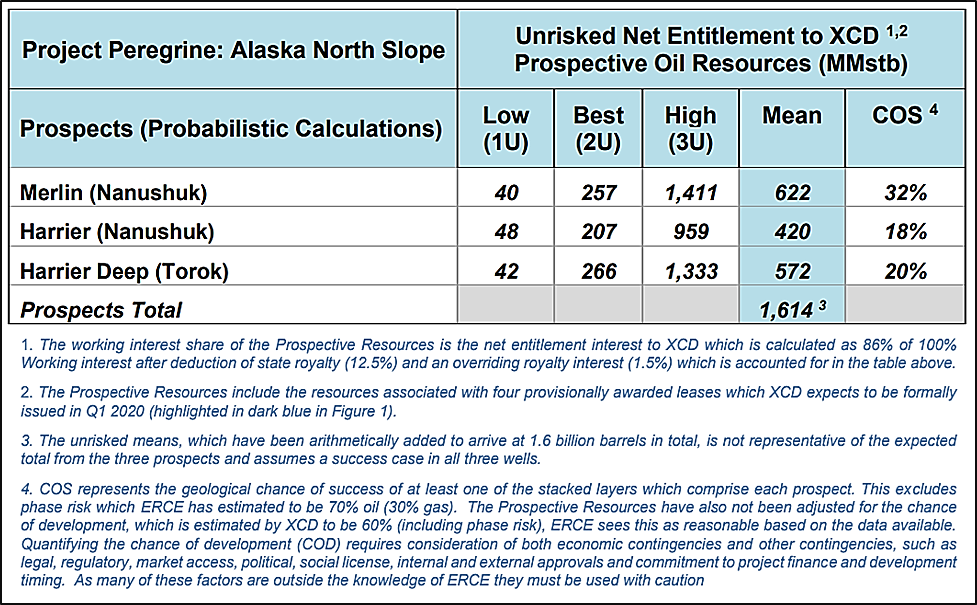 The announced prospective resources are the combination of the three prospects of Peregrine projects, and they are Merlin Prospect, Harrier Prospect and Harrier Deep Prospect.

Peregrine’s Harrier and Merlin prospects are targeting drilling at the shallow Nanushuk play using a smaller drilling rig, which the company is continuously evaluating at ~4,300 and ~3,400 ft respectively. 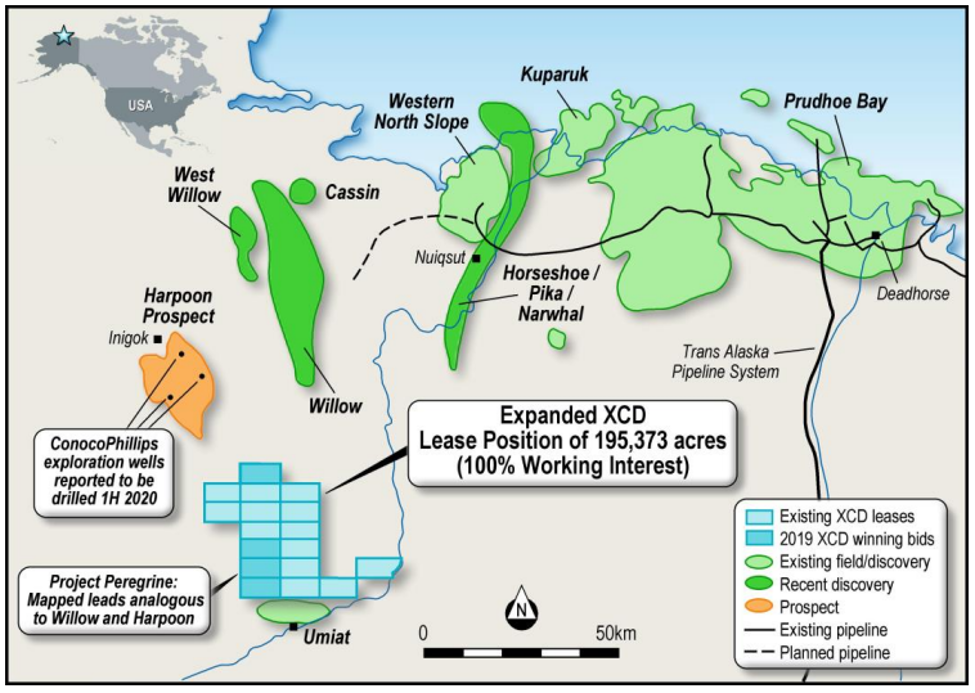 XCD’s next step toward Farm-out Campaign

The company is planning to initiate farm-out campaign soon to execute the drilling options available to farm-in partners to either use the two well low cost shallow Nanushuk drilling initiative or north slope drilling rig to engage in all the targets of Merlin and Harrier Prospects.

As of 30th September 2019, the company had cash reserves of ~1.3 million with no liability.

The Company’s initiative towards the farm-out campaign is expected to be financially smooth since the company has no debt and it is fully funded to meet the FY20 objective and maximise the shareholder return. The low-cost drilling option at Shallow Nanushuk, located in one of the super basins is expected to provide significant leverages.

Also, it is worth mentioning that there has been continuous bid for Alaskan leases since 2006 and has received US$11 million over 1 million acres bid by Armstrong, ConocoPhillips and XCD in 2019. XCD through its wholly owned-subsidiary Emerald House LLC has been the highest bidder for 45,783 acres (4 leases) in NPRA.