Lithium Australia NL (ASX: LIT) has a portfolio of projects throughout Australia, which includes Bynoe Project, Kangaroo Island project, Cape York Project and many more. The company is focused on identifying potential lithium development opportunities so that it can establish itself as a leading provider of lithium to the battery industry.

The company’s strategy is focused on below-mentioned activities:

The company recently came up with an encouraging announcement stating that it has located lithium-anomalous pegmatite dykes at its Dudley prospect at the Kangaroo Island Project, which is located in South Australia.

The location of Kangaroo Island Dudley (and Vivonne) lithium prospects can be seen in the image below. 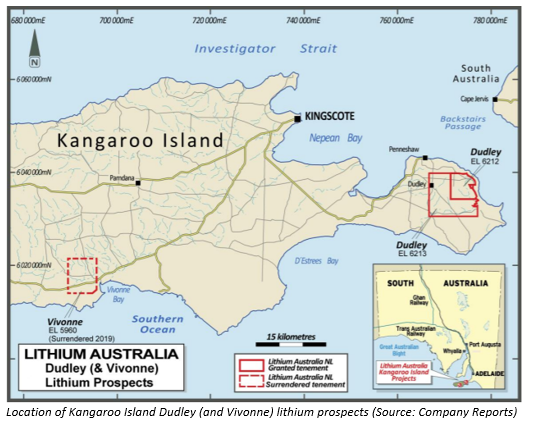 The sample results are indicating the presence of lithium pegmatites, which is an encouraging piece of news for the company and its shareholders. Some of the notable sampling results are shown in the table below. 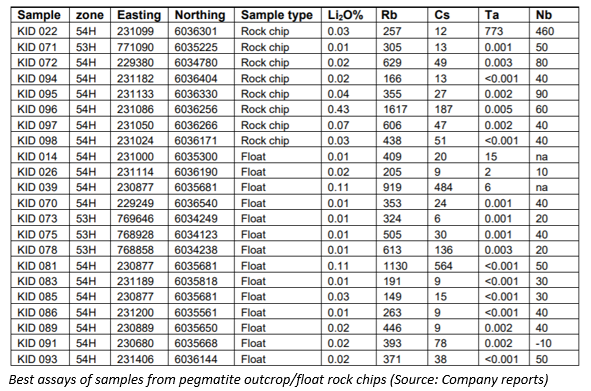 Along with lithium, the tantalum values recorded in the process have also been highly significant, as values above 200 ppm are considered economic grades and, in this case, the values are reaching up to 770 ppm.

Given these results, it has been confirmed that the Dudley prospect at the Kangaroo Island Project has the potential to host a lithium deposit.

In order to further determine the extent of lithium and tantalum mineralisation of the Dudley, the company is planning a geochemical soil-sampling programme over the Dudley prospect and the nearby areas which will also help the company in locating additional LCT pegmatite. 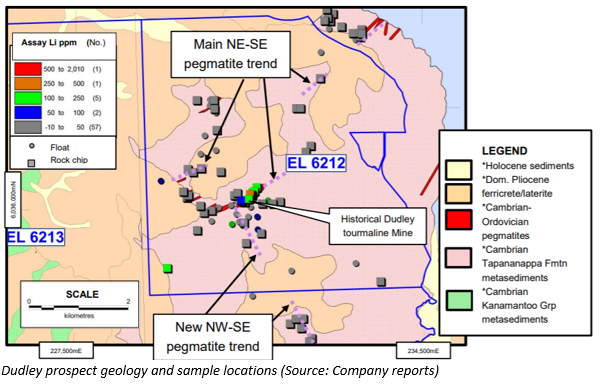 Taking into the consideration the increasing global demand of lithium, the presence of lithium-anomalous pegmatite dykes at the company’s Dudley prospect of Kangaroo Island Project is an extremely positive news for the company.

In another recent announcement on ASX, the company confirmed that it has extended its interest in Envirostream Australia Pty Ltd to 11.76 per cent by making further equity subscription of $100,000. The company is planning to increase its stake in Envirostream to 18.91 per cent, which will help Envirostream to expand its capacity for the recycling of lithium-ion batteries.

To understand the potential for direct leaching of the vanadium and associated base metals, the company will now evaluate the metallurgical characteristics of the oxide mineralisation at Youanmi and is planning a drilling programme to enable a reasonable quantity of oxide material to be recovered over the full depth of the oxidised profile.

To undertake drilling activities at Youanmi and Medcalf as well as to make progress in the development of SiLeach®, LieNA®, and L-Max® options, the company recently invited its shareholders for a 1 for 6 renounceable pro-rata entitlement offer to raise up to around $6.5 million.

The proceeds of the offer will mainly be used for the following purposes: 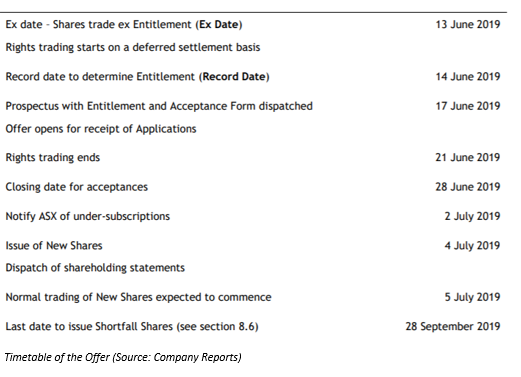 While informing about the nature of the mineralisation at Youanmi, the company has advised that the oxidised mineralisation extends to 20 m - 50 m, with an average depth of 40 m and virtually no overburden. The fresh mineralisation has been estimated to 400 m above sea level, and between 75 m and 80 m below the surface.

During the March quarter, the company completed a successful pilot-plant run at its Generation 2 SiLeach® facility. During the pilot-plant run, it was observed that the recovering lithium as a phosphate has a number of process advantages over carbonate or hydroxide, confirming that the lithium phosphate can easily be used for the synthesis of lithium-iron phosphate (LFP) cathode materials.

During the March quarter, the company continued with (1) the production of cathode materials, which is a lucrative element in the lithium-ion battery production cycle, (2) its 100%-owned VSPC pilot plant located in Brisbane.