Australia’s leading rare earths company, Lynas Corporation Limited (ASX: LYC), has responded to recent media reports about the effect of Bukit Ketam on Kuantan’s water. Lynas has expressed its disappointment over the behaviour of anti-Lynas activists such as those recently released media report and has called those media statements as false statements and inflammatory accusations which have been made to mislead the Malaysian people.

In its response, Lynas has confirmed that the State Government has issued a letter to Lynas Malaysia Sdn Bhd and it has agreed with the company’s proposal to locate the Permanent Deposit Facility (PDF) site at Bukit Ketam Kuantan, subject to conditions relating to approval of the federal government.

Following Lynas’ response, the company’s stock witnessed an uplift of 4.608% in its share price.

As per the company update released on 30 January 2020, preliminary due diligence and the opinions consultants have made Lynas believe that the site will be suitable location for the Permanent Deposit Facility.

Lynas has assured that prior to construction of the storage facility, further work will be undertaken in accordance with international guidelines and regulatory requirements and along with this it will continue to engage with all relevant stakeholders, including the state and federal governments, regulatory authorities, and its communities, every step of the way.

The company has already appointed Gading Senggara Sdn Bhd (GSSB) as the contractor to manage the entire PDF project and has decided to pay USD 98 million for doing this job, as summarized in the table below: 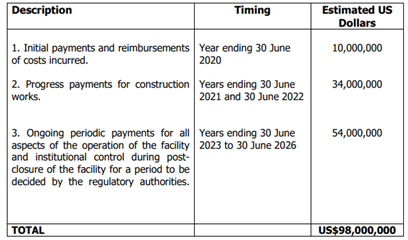 Site at Bukit Ketam is not in a water catchment area

As per Lunas, the anti-Lynas activists have also made uninformed and misleading statements about the effect of Bukit Ketam on Kuantan’s water as external experts have confirmed that the site at Bukit Ketam is not in a water catchment area and expert studies have demonstrated that the PDF can be constructed to ensure there is no pathway for material to reach the water supply.

Lynas has warned that it will not shy away to take legal action against those who are involved in defaming the company and its people.

Over the last quarter, Lynas has continued to engage productively with local stakeholders and communities. During the quarter, the company welcomed 390 visitors to its plant including visitors from Institute of Engineers Malaysia, Pahang Institute of Chemistry, IAEA Postgraduates in Radiation Protection and Safety, Royal Military College Alumni and Roskill Conference participants. In all cases the visitors provided positive feedback including that it was well worth their time to see the plant with their own eyes.

The company’s excellent corporate social responsibility (CSR) record continued through the quarter and was recognised by Lang International with Lynas Malaysia receiving their Best in CSR Award.

Lynas continues to proactively engage with key Non-Government Organizations (NGOs) and its local communities directly and recently commenced a new communication programme in major Malaysian media. Samples of the materials published are appended to this report.

Last year, Lynas Malaysia did not receive regulatory approval for an uplift in the lanthanide concentrate processing limit for Calendar Year 2019 (CY19) due to which the production during the September and December quarters was managed at reduced rates. The total NdPr production for CY2019 was slightly higher than the previous calendar year, in accordance with guidance. Total REO production was lower as we took the opportunity to make a number of circuit upgrades to improve quality. These upgrades affected production of the lower value La and Ce products during the quarter.

How is Lynas helping Malaysia?

In Malaysia, Lynas has over 1,000 employees and contractors and it continues to make significant contribution to the country’s economy.

Lynas is among the very few REE producers who have established operations outside China, which is currently the largest exporter of Rare earths. Recently, when China threatened US to use their dominance in the Rare earth space to have the upper hand in the current US-China trade war, it opened a gateway of opportunities for rare earths companies outside China. Due to this, many investors are keeping a close on Lynas and its activities. On May 21, 2019, the group announced its Lynas 2025 Growth Plan. The key elements of the Lynas 2025 Growth Plan include expanding production capacity to 10,500mt per annum of NdPr products, relocating cracking and leaching operations to Western Australia and the proposed establishment of heavy rare earths separation capability in the United States of America via the proposed Joint Venture with Blue Line Corporation.

Lynas is primarily focused on serving customer demand and supporting the development of the market outside China. Demand in these markets remains strong and Lynas is making excellent progress towards its objective of selling all production to outside China markets.