Graphite is a non-metal available in different forms and has several beneficial properties such as thermal resistance, high melting point, and high electrical and thermal conductivity, owing to which its demand across several industry verticals is booming. Such characteristic traits have placed graphite amongst the most crucial components for applications including steel making, expandables, refractories, foundries, batteries for electric and hybrid electric vehicles, among others.

The staggering growth in the battery industry can be attributed to significant advancements in the electric vehicle and energy storage industries, which is poised to escalate growth in the graphite market over the coming years. Demand for graphite for use as anode material in lithium ion batteries is forecast to grow by more than 200 per cent over the coming 4 years, according to data released by Benchmark Mineral Intelligence, with a part of this demand partly driven by a projected surge in demand from electric vehicles.

The major types of commercially available natural graphite forms are flake, amorphous, and vein graphite, with the first type (flake graphite) contributing to the largest share in the demand for graphite across the globe. Demand from end user for natural graphite is expected to grow when in comparison to synthetic graphite, due to its lower impact on the environment, cheaper production cost, and higher energy density and power output.

BlackEarth Minerals NL (ASX: BEM) is an Australian born and Madagascar graphite explorer and developer, whose strategy revolves around flake graphite, backed by the expected global deficit for flake graphite by 2023. Additionally, the company is targeting to secure offtake agreements in China, which is a major importer of flake graphite, particularly from Africa due to the presence of low-cost producers. 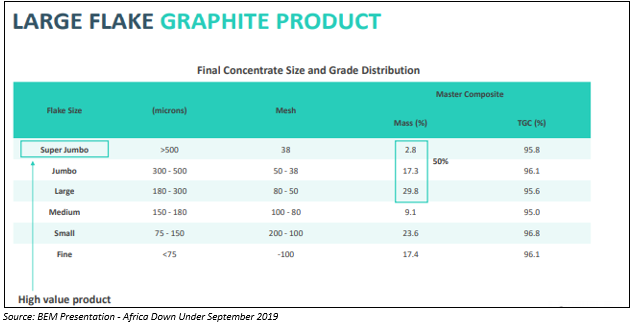 BlackEarth Minerals on Track towards Success

BlackEarth Minerals is completely focused on fast-tracking the development of its flagship Maniry Graphite Project, which is located in the southern region of Madagascar – the African nation with more than 100 years of graphite mining and international exports. As demand for graphite is increasing in countries including the United States, China and India, they are continuing to boost their natural graphite imports from Madagascar, which is now the fifth largest supplier of natural graphite across the globe.

To date, BEM has announced several encouraging updates on the Maniry Graphite Project. Some of them have been discussed below.

BCMM Support: During a meeting with Madagascar Minister of Mines and Strategic Resources, Mr Fidiniavo Ravokatra in June 2019, BEM secured the ministry’s support for fast tracking the Maniry Project, as the Madagascan Department of Mines (BCMM) recognised the strategic value that the project is expected to deliver towards the development of the region.

As part of the feasibility study into the project, the company is in negotiations aimed towards closing an offtake agreement. Based on the financial analysis, the Maniry Graphite Project is expected to deliver robust financial returns with moderate capital expenditure needs for more than ten-year project life following the processing of first ore.

BGRIMM for Finalising Maniry Graphite Ore Testing: On 1 October 2019, the company announced to have appointed the Beijing General Research Institute of Mining and Metallurgy (BGRIMM) in China for finalising Maniry Graphite ore testing. In two phases, the institute will undertake a large-scale pilot metallurgical test program on graphite ore weighing 60-70 tonne, with completion scheduled in the first quarter of 2020.

The company is targeting to complete the project feasibility study during 2020 and start the project commissioning in 2021.

BlackEarth Minerals is parallelly reviewing the potential of its second graphite project in southern Madagascar – Ianapera. For the project, the company registered high-grade graphite trenching results, in addition to defining an exploration target of 20-34Mt at a grade ranging from 10 per cent to 20 per cent TGC.

Encouraging results and achievement of several significant milestones from the Maniry Graphite project confirm the very high quality of ore products that would be sourced from the project. Additionally, with government support and expected surge in demand for graphite BlackEarth Minerals NL seems to be on track to meet some of the supply demands for graphite in the near future.