What do you mean by Neoliberalism?

Neoliberalism is a new form or resurgence of classical liberalism that emphasises the value of free trade and free-market competition. Neoliberalism advocates minimum interference of government in economic and social affairs. Accordingly, neoliberalism policies promote privatisation, public ownership, globalisation, austerity, free trade and reduction in government spending to increase the role of the private sector in the economy. In terms of policymaking, neo-liberalism was a paradigm shift from Keynesian economics, which propagated an increase in government spending and existed before the stagflation of the 1970s. Keynesian policy, which flourished following the second world war, encouraged the monetary policy's loosening and emphasised an increase in government spending on infrastructure and social welfare.

Usually, neoliberalism is linked with the administration of Margaret Thatcher–the British Prime Minister from 1979 to 1990 and Ronald Reagan, the 40th US president.

The word neoliberalism was invented at a meeting in Paris in 1938. The two delegates who defined the ideology were Ludwig Von Mises and Friedrich Hayek from Austria. They considered social democracy and slowed progress of Britain's welfare state to display collectivism that occupied the same spectrum as Nazism and Communism.

Is Neoliberalism same as Libertarianism?

Neoliberalism championed laissez-faire economics, a school of thought that prescribes individual freedom into economic and social affairs against excessive intervention by the government. Laissez-faire economics believes that consistent economic growth will result in technological innovation, minimum state interference and expansion of the free market.

Sometimes there is a lot of confusion between neoliberalism and libertarianism. However, the duo is different. Neoliberals support more government intervention into the economy and society as compared to the libertarians. For instance, neoliberals primarily advocate progressive taxation, whereas libertarians often abstain from this stance in support of schemes like a flat tax rate for all the taxpayers.

Besides, neoliberals are often not against measures like bailouts of major industries, which are abhorrent to libertarians. 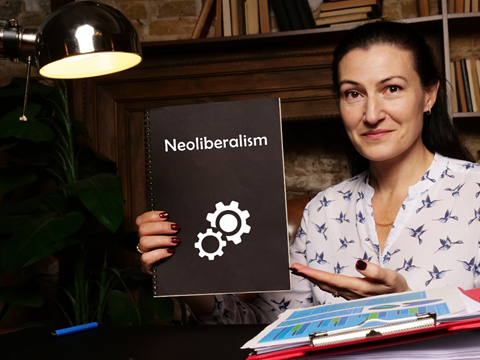 What is the difference between liberalism and neoliberalism?

What are the characteristics of Neoliberalism? 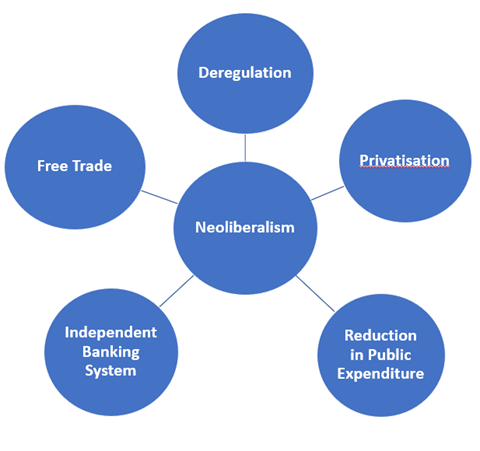 Proponents of neoliberalism believe that deregulation will help companies become more profitable and enhance the overall quality of running businesses.

Free trade is another essential characteristic of neoliberalism. Free trade helps countries trade with other countries without any additional cost. Impositions of tariffs and other trade barriers by way of specific legislations increase the cost of products, thereby making them more expensive. Neoliberals argue that free trade reduces the cost of goods, thus makes it less expensive to purchase goods abroad, and it is mutually beneficial for both the countries involved in sale and purchase. It is also believed that when consumers buy goods and services at low costs, they pay less money, and the money saved can further be used by them to buy more goods; this will help in the creation of employment. On the issue, whether free trade is taking away the jobs from one country and shifting them to another, neoliberals say that the shift in jobs is temporary or short-lived.

Privatisation means transferring state-owned enterprises or businesses to the private sector. Examples of this can be banks, educational institutes, utility companies, health institutes and transportation services. The purpose of shifting this ownership from state to private sector is to achieve efficiency. This is because the private sector is considered more efficient when it comes to business as it produces the maximum optimal outcome.

The concept of the minimum influence of the government over the economic interactions of individuals also entails that the supply of money in the market is free from political intervention. Sometimes, to fulfil vested interests, an incumbent government can increase the money supply to gain votes. However, if central banking is free from government control, it will end the political manipulation of the banking system by political parties.

Usually, the Government expenditure mainly focuses on three sectors-health, education, and infrastructure. If the government cuts down the public expenditure on health and education, the poor will be at receiving end because these facilities will remain inaccessible to them.  In such a scenario, it depends on the private sector how they manage these services and make them accessible to all.

What do critics of Neoliberalism say?

Free market approach with respect to public services is misled:

One widespread criticism of neoliberalism is supporting the free-market approach in health and education because these services constitute public services. Industries are driven by the profit motive, whereas this is not the case with public services. Moreover, adopting a free-market approach in sectors such as health and education can be detrimental to equality as it will increase inequality. Besides, it will also result in the underfunding of resources for these two sectors that are prerequisites for an economy's long-term health and viability.

In the Western world, the adoption of neoliberal policies has been in concurrence with increased inequality in terms of wealth and income. As a result, skilled workers can demand higher wages, whereas unskilled or low-skilled workers are subject to stagnant salaries.

Typically, the growth of monopolies that increase the profits of corporations at the cost of any benefits to customers is encouraged by neoliberal policies. 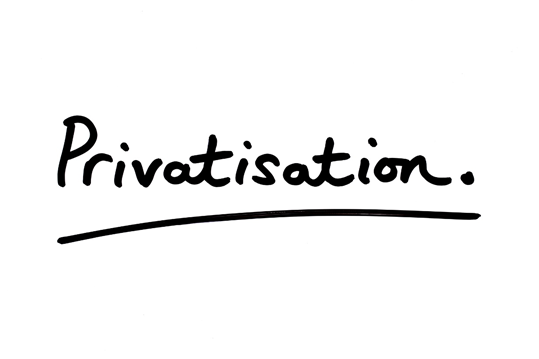 Capital deregulation, one of the characteristics of neoliberalism, has not led to economic development as claimed by the proponents of this economic theory. Instead, this has resulted in increased financial instability, which has shaken the world economy at times. An International Monetary Fund (IMF) report on neoliberalism stated that increased cash flow is a critical reason for a greater risk of unfavourable economic cycles.

Neoliberalism's focus on economic efficiency has boosted globalisation. However, the critics view this as denying sovereign nations of the right to self-determination. Opponents of neoliberalism also say that bringing in more private corporations to replace government-owned corporations can decrease efficiency. Moreover, they argue that though privatisation can enhance productivity, it may not guarantee sustainable improvement because of the world’s limited geographical area. Besides, the critics also call neoliberalism anti-democratic, resulting in exploitation and social injustice and can criminalise poverty.

It is widely debated that neoliberalism has increased inequality, which can become an impediment to an economy's long-term growth. This is because on one side; there are people who have limited spending power due to low income; simultaneously, on another side, there are people who are becoming rich and thus has a higher propensity to save. In such a situation, wealth does not trickle down as per claims made by the champions of neoliberalism.