After three days of continuous growth, the TSX Composite Index ended the week in the red on Friday, September 24. However, the fall was mitigated by rising energy prices. As the market reopens, let's look at the top stories with regards to the country's economy.

Animosity rising between vaccinated and unvaccinated

Recent protests against vaccine passports have failed to win mainstream compassion as the online poll of 1,549 people reported that the vaccinated looked upon the other side as “selfish and irresponsible”. The findings reportedly showed that while the unvaccinated justify their vaccine hesitancy over personal reasons, they are unlikely to sympathize with others for doing so for other reasons.

Oil prices, as expected, rallied Monday, September 27, on demand around the world. West Texas Intermediate broke the US$ 75 mark. Brent reached the highest it has ever been since October 2018. It is on the brink of hitting US$ 80 a barrel and market analysts believe it could hit US$ 90 by the end of the year.

OPEC+ is scheduled to meet October 4 about policy regarding output. With supplies as they currently stand natural gas is expected to continue to surge as winter is coming.

The demand of venture lending entrepreneurship as technology steams ahead in the wake of the pandemic has resulted in CIBC Innovation Banking opening an office in London. Now boasting 12 locations in total, it plans to double its innovation banking staff. 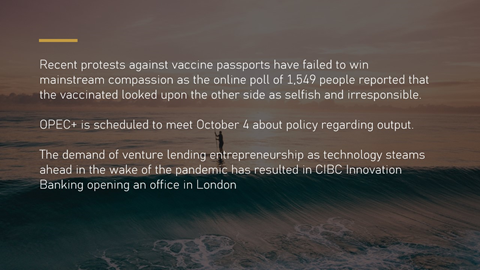 To end on a positive note, last week did with a diplomatic effort that saw Canadians Michael Kovrig and Michael Spavor back in the country after China freed them following Huawei Chief Financial Officer Meng Wanzhou’s return to the Asian country.

The two Canadians were held captive on espionage charges since December 2018 after Ms Meng was arrested by Canadian police acting on a US warrant alleging fraud.