The retail industry is the largest private sector employer in the UK, with one in 10 people working in the sector. Despite of the collapse of the British high street, online sales accounts for one-fifth of total retail sales across the nation. Supermarkets such as Tesco, Sainsbury’s, Asda and Morrisons have dominated the Britain’s retail landscape, followed by department stores such as John Lewis. Technology retailer Dixons Carphone also makes way in the top 10, along with Boots, according to market research firm GlobalData.

The retail sector is of paramount importance as it operates as a gateway to the consumers. While the Covid-19 pandemic has dramatically disrupted its operations, the mitigation measures aimed at slowing the novel coronavirus pandemic taken over the past few months have directly affected the supply, demand, and daily operations of the retail sector.

However, there was a rapid increase in the demand for online shopping in the first few weeks of the pandemic which came as a great opportunity for the futuristic retailers. Supermarkets were able to get ahead of other retailers and brands, thanks to their ability to scale-up quickly and establish a reputation for reliability that made them a first choice for a wide range of goods. As the economy is reviving with the easing of lockdown restrictions, a change in the consumer behavior is evident.

As per the latest Barclaycard consumer confidence survey for July 2020, an annual increase in grocery shopping of 17.7 per cent was recorded, which pushed up the essential spending by 3.2 per cent, offsetting a drastic fall in fuel sales. However, this fall was less than that recorded in the earlier month of June 2020, due to journeys connected with staycations, people returning to work, and the reopening of shops, bars, restaurants and leisure centres. 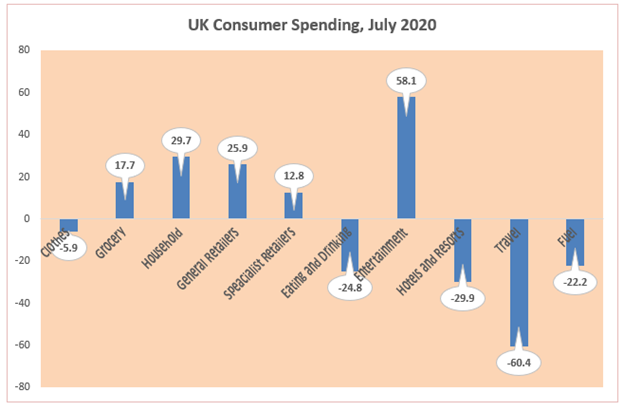 Supermarket shopping rose by 15 per cent, indicating normal spending in this category, as consumers ate out more and returned to other shops for their non-food needs. People also continued to support local food and drinks specialists, which also saw substantial growth.

Non-essential spending was down by roughly 5 per cent, its slowest decline since lockdown, as consumers spent more on specialist retailers.

Areas In Which Consumers Are Spending

The overall retail spending improved by close to 18 per cent for the same month, driven by the segments of groceries, household goods, and sports goods. The summer weather and the holiday season encouraged people to spend more time outside, giving sports and outdoor retailers a good rise. Pharmacy, health and beauty purchasing also grew, resulting from the long-awaited reopening of hairdressers, nail bars and beauty salons.

While decline in overall travel spending in July 2020 was lower than the June levels, greater opportunities to take staycations failed to offset concerns about overseas holidays.

Despite a 64 per cent fall in spend for restaurants, and 43 per cent fall for bars, pubs and clubs, the hospitality industry was optimistic.

Online spending rose to account for close to half of the total consumer expenditure for the month. Online expenditure rise was supported by the segments of grocery, earing & drinking, along with specialist retailers’ sales.

The Office for National Statistics (ONS) also revealed that the UK retail sales returned to pre-Covid levels in July 2020, as sales volume grew by 3.6 per cent on a monthly basis. The value of retail sales grew by 4.4 per cent between June and July 2020.

Meanwhile, total online retail sales fell by 7 per cent over the earlier month of June 2020, but were a staggering 50 per cent higher than in February 2020, reflecting the continued consumer preference for online shopping since the crisis began. Food sales in July also remained more than 2 per cent higher than pre-pandemic levels.

To know more, do read: Retail sales rises in UK

The retail industry is an essential sector of the UK economy, which is recovering from an elongated period of disruption. The coronavirus pandemic, leading to challenging economic conditions, consumer behaviour, increased internet shopping is changing the operational techniques of the retailers.

Below we have discussed two of the retail stocks, that are likely to benefit from the increase in consumer spending.

Tesco PLC – is a leading supermarket providing consumer services. The company had recently released its trading statement for the first quarter of FY20-21. Food sales of the company grew at approximately 12 per cent in the UK because the customers focused more of their purchases on essential items. Tesco PLC (LON: TSCO) stock was trading at GBX 218.70 on 8 September 2020 at 12:05 PM, up by 0.64 per cent from its previous close of GBX 217.30. The 52-week low/high price was GBX 211.20/258.90. It was having a market capitalisation (Mcap) of £21,281.27 million.

Associated British Food PLC – is a foodstuffs producer and seller of tea, sugar, cereals, and clothes. Bread-baking is ABF's oldest function, with operations in 48 countries worldwide. The company is the owner of low-cost high-street fashion chain Primark. It also manufactures and markets grocery products, sugar, ingredients, and agricultural products. After a period of store closure, the company is encouraged by the strength of its sales. In the latest data, all channels Primark achieved highest ever value and volume shares for the first week of September 2020. Associated British Food PLC (LON: ABF) stock was trading at GBX 1,974.00 on 8 September 2020 at 12:17 PM, down by 3.14 per cent from its previous close of GBX 2,038.00. The 52-week low/high price was GBX 1,607.50/2,708.00. It was having a market capitalisation (Mcap) of £298,214 million.