What are the key climate change issues in Canada?

The various regions in Canada are facing various climate crises such as rising sea levels, flooding, increasing temperature, landslides, and snowstorms. Have you ever wondered why these regions are experiencing such climate crises? In this article, we will learn what the key climate change issues are in Canada.

Due to climate change, Canada experiences various changes, including shifting rainfall patterns, and rising temperatures. Among them, greenhouse gases (GHGs) emissions are one of the major causes of climate change which traps heat in the atmosphere and creates a warming effect.

What is climate change science?

What is Environment Canada (EC)?

EC is a group of climate scientists. Through a wide range of EC climate services, the department helps in interpreting and communicating science-based climate information.  EC’s Canada-wide observation network is engaged in observing shifts in air quality, water, weather, climate, and ice.

How has climate change affected Canada?

The government of Canada reported that from 1948 to 2014, the temperature of Canadian land has increased by 1.6°C, which is double compared to the global rate. All regions across Canada have warmed and the greatest warming is observed in the north region. Due to the increase in temperature, the northern region is experiencing thawing permafrost and the ice cover is melting.

Environment Canada (EC)’s scientists have observed changes in wildlife species and geographical distribution in Canada. The Arctic regions have experienced a shift in sea ice distribution and sea ice melting in the summer months. These changes have affected Arctic-breeding migratory birds and polar bears.

The transportation sector was responsible for approximately over one-quarter of greenhouse gas emissions in Canada. Environment Canada (EC) is working with the US in controlling the emissions from passenger automobiles, light trucks, heavy-duty vehicles, and engines. Transport Canada is also working with the U.S. and international partners to address emissions from different sectors, including aviation, rail, and marine transportation.

The energy from coal impacts the environment and causes emissions, smog, and acid rain. The burning of fossil fuels such as coal develops various greenhouse gases, including carbon dioxide, nitrogen oxide, sulfur dioxide, and methane gas which causes climate change.

The coal export plants situated on the Pacific coast of Canada want to expand exporting thermal coal from the Powder Basin of Wyoming. which causes local pollution issues and greenhouse gas emissions.

The mining process develops greenhouse gas emissions. The failures of dams and tailing ponds affect water bodies. The various mining activities, including exploration, construction, and operations, can cause deforestation, erosion, contamination of water bodies, and noise. Other than mining, the infrastructure that is developed to support the mining process affects animals’ migration, habitat loss, and fragmentation.

Dams are known as clean energy as it does not use fossil fuels to produce energy. But it is causing environmental harm in many ways. The development of reservoirs can flood land used as farmland, and forces people to migrate.

The changes they cause disturb fish and bird migration. The decaying of flooded vegetation develops greenhouse gases such as methane and carbon dioxide and the deforestation due to dams causes carbon dioxide emissions in the air. In some instances, a dam can generate more carbon emissions than a thermal power plant. 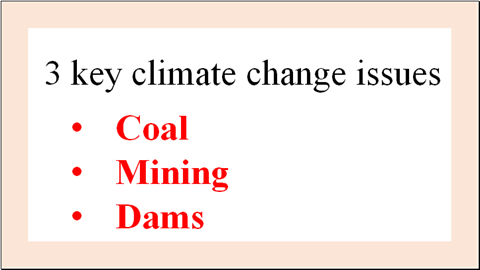 Climate change can affect ecosystems, the economy, human health, and natural resources in Canada and worldwide. It is a global problem that needs a well-designed environmental policy, and measures which will focus on renewable energies, sustainable transportation, waste management, recycling, sea, ocean, and air pollution prevention, to tackle the increasing climate change.