How is Canada empowering women in fight against climate change?

According to the government of Canada, women are disproportionately affected by climate change. Traditionally, women have been nurturers to their families and the stress of climate change on resources interferes with this.

With regards to dealing with climate change, what Indigenous women bring to the table is considered unique. They are looked on as leaders when it comes to climate action.

The government of Canada say it is focused on empowering women in this space. It is also trying to encourage women in the international sphere with regards to climate action and make them more involved in decision making processes at the global level.

The government is focused on realizing the goals of the Gender Action Plan of the United Nations Climate Change Convention (UNFCCC) COP23. The goals of the plan are the following:

A UNFCCC negotiation coaching session was held by the Women’s Environment and Development Organization (WEDO) and Canada. It saw 12 participants from the Caribbean. Canada then sponsored two of them to act as negotiators representing their home countries at COP 23.

The National Indigenous Organizations called upon by Canada as part of its COP 23 delegation included the Assembly of First Nations, Inuit Circumpolar Council, Congress of Aboriginal Peoples, Inuit Tapiriit Kanatami, Native Women’s Association of Canada and the Métis National Council.

The Canada-France Climate and Environment Partnership saw the commitment from both the countries to empower French-speaking women from Africa with negotiation training.

On May 17, 2018, Catherine McKenna, Minister of Environment and Climate Change, held the Climate Leaders’ Summit: Women Kicking It on Climate.

The G7 Gender Equality Advisory Council was started by Canada to help build gender-based analysis and gender equality across the group. 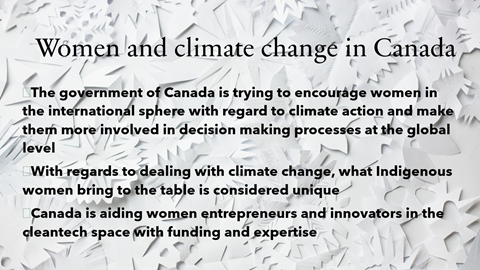 Climate change is a reality faced by our planet and Canada is particularly affected by global warming given its proximity to the north pole. The country is empowering women, including by aiding women entrepreneurs and innovators in the cleantech space. This aid includes funding and expertise.

Also read: Canada Budget 2022: What are Freeland’s plans for cost of living?