The New Zealand government has pledged $1.3 billion over the next 4 years to help vulnerable and poor countries tackle climate change. Half of the money will go to the Pacific nations that are on the front line of climate change. The move comes as the country plans to increase its share in global climate funding. The country had committed $300 million previously for this effort.

The investment will allow NZ to support clean energy projects in developing countries and many other initiatives.

Amid this backdrop, let’s skim through how these 5 NZX energy stocks are performing. 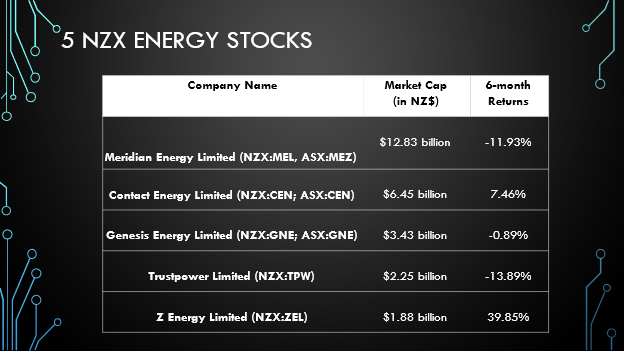 Leading electricity producer of NZ, Meridian issued share rights on 6 October to choose few Meridian employees related to its Executive LTI scheme. Each share right will authorise the holder to 1 share in the company and additional shares equal to the value of gross cash dividends per share.

RELATED READ: How would NZX energy stocks help in driving down emissions?

The issue of share rights is likely to happen on 21 October 2021.

RELATED READ: Contact (NZX:CEN): How did it perform in September month?

The Group’s wholesale business reported an electricity and steam net revenue of 95.10/MWh, up from $83.78/MWh on pcp.

Electricity generation company, Genesis Energy, announced on 14 October that the inlet compression project had enabled the Kupe plant to return to its full production capacity of producing 77 TJs per day. This is equivalent to supplying nearly 15% of NZ’s natural gas demand.

Craig Brown, Genesis’ Group Manager Kupe Joint Venture stated that natural gas would continue to be an essential fuel as NZ shifts to a low-carbon future.

Trustpower announced Tuesday that Catherine Thompson would join as General Manager in the Regulatory and Risk department in early 2022, parallel to the expected completion of the sale of the Group’s business to Mercury. Ms Catherine will report to CEO David Prentice.

The role is significant to make sure that TPW fulfils its growth ambitions and stakeholder focus on which its exit from the mass market retail was based.

Kiwi transport fuel company, Z Energy, announced on 14 October that the last day of trading in ZEL040 would be 20 October 2021 before bonds are suspended at the close of the business.

The final quotation date for the business will be 1 November 2021. ZEL also notified that the General Manager of Supply, David Binnie, will leave the firm during Q4 FY22.

The question remains if the boost in climate spending is a step in the right direction with NZ already facing many years of budget deficit.