What is carbon tax?

A carbon tax is used to discourage the burning of fossil fuels in a move to prevent climate change. The government imposes a carbon tax on any company that burns fossil fuels. These fuels include coal, gasoline, and natural gas.

The burning of these fuels leads to the production of greenhouse gases, which ultimately heat up the earth leading to global warming. The phenomenon behind this is known as the greenhouse effect. Global warming leads to extreme weather conditions such as floods, droughts, heatwaves, etc.

The purpose of the tax is to reduce the emissions of these greenhouse gases. To do that, the tax must be high otherwise companies would not be discouraged from burning fossil fuels. The tax revenue collected can be used to offset the damage done to the environment by the company. Additionally, the government may consider lowering the corporate tax and other levies charged on these companies. Higher carbon tax would ensure that companies keep this at their priority and try to minimize it as much as they possibly can. 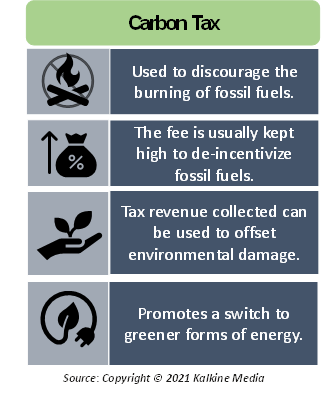 How does carbon tax work?

Carbon tax is a type of Pigouvian tax. It functions much in the same way as a pollution tax does. The tax is charged based on how many emissions have been caused by a firm. Without such a tax, the firms responsible for causing these emissions would not be accountable. This means that these companies could gain the benefits of burning these fossils fuels without addressing the negative externality left behind.

A carbon tax ensures that the burden of dealing with the negative externality falls on those responsible for creating these emissions. Had it not been for policies like a carbon tax, or a pollution tax, future generations would be burdened with the leftover emissions, leaving it up to them to clear these emissions and live under climate change. 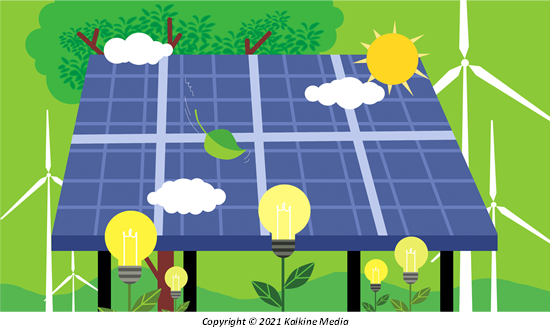 Governments may decide to add different levels to cost to tax the level of emissions released by companies. These costs are dependent on scientific and economic assumptions, making them different for each region.

Fuel suppliers are allowed to pass on the cost of the tax to the extent allowed by the market conditions. Under the carbon tax, that amount of carbon which is not burned is not taxed. This means that carbon chemically bound into components such as plastic would not be taxed if sold. However, when used as a fuel it is bound to be taxed. Tax credit may be offered in the instances where carbon sequestration is done.

Why is there increased focus on carbon emissions?

Carbon is one of the most abundantly present greenhouse gases in the atmosphere. Though it is less harmful than most other greenhouse gases like methane and nitrous oxide, carbon is the greatest contributor to the speeding up of the global warming process.

Carbon-intensive industries would be taxed more heavily than those industries which do not use carbon as intensively. Carbon-based fuels are easier to procure and generally cheaper than other greener alternatives. Thus, a tax would de-incentivize buying carbon-based fuels by making them more expensive.

How is carbon priced?

Calculating one’s carbon footprint is a necessary step towards the adoption sustainable living. However, it is difficult to attach a monetary value to emissions released into the atmosphere. Thus, governments start from the end point in calculation, i.e. the loss to consumers due to these emissions.

The cost to consumers includes the cost of the adverse effect of these emissions paid for by the public like the damage to crops due to bad weather, healthcare costs due to adverse climatic conditions as well as loss of life and property caused by floods and other environmental hazards.

What are the advantages of carbon tax?

What are the disadvantages of carbon tax?

Any tax that is implemented in an economy has welfare implications. A carbon tax is a regressive tax as it puts more burden on the lower income group. This means that those individuals who cannot afford to shift to renewable forms of energy would end up buying the fossil fuels such as gasoline and coal and necessities at a higher rate due to the tax.

Thus, these people would not be able to cut down on their consumption. For this reason, such a tax should be imposed gradually, so that consumers have time to shift to other sources of energy. Additionally, the government can give some reimbursement to low-income groups from the tax revenue collected.

What is super and is it worth getting insurance through it?

Which are the hottest ASX-listed lithium stocks?

What is the 45-day holding rule?

Which are the top utility stocks on Wall Street?

What is Junior ISA?

How often do companies pay dividends to shareholders? Which are good dividend payers on the NZX?