What Are Bollinger Bands®?

Many technical analysts use Bollinger Bands to confirm a volatility break, which further suggests large participation in the underlying asset.

An envelope is usually considered as a price range above and below the mean value of a price data, in which, security tends to continue trading. However, it is not always necessary that a security would always move within an envelope around the mean value, and that is what know as an envelope breakout which technical analysts usually spot and trade.

Also, defining an envelope around a mean value could be a daunting task as there are a vast number of possible methods, tools, and techniques, which could be used to develop an envelope.

Moreover, identifying a method which best fits or justify the price fluctuations around a mean value is also challenging, and that is where Bollinger Bands come into the picture.

One popular method of creating an envelope is to take a fixed percentage from the moving average, which is known as the percentage envelope.

For example, to create a percentage envelope, many analysts usually calculate 2% to 5% up move and down move from a mean value (depending upon the daily price change of a security) and plot the same to create an envelope around the mean value.

Furthermore, many technicians use percentage envelopes to reduce numerous unprofitable signals from crossing a moving average when the trend is sideways, allowing them to ignore any small penetration above the mean value; thus, avoiding whiplash in a sideways market.

In a percentage envelope, the percentage to plot the upper line and lower line of the envelope is often determined through experiment, and sometimes it could become very challenging to identify a percentage which would keep minimum outliers historically.

Just like envelopes, bands are also an upper limit and lower limit plot around a mean value; however, they differ from envelopes in a way that they are dynamic rather than static and adjust for a change in the market volatility. 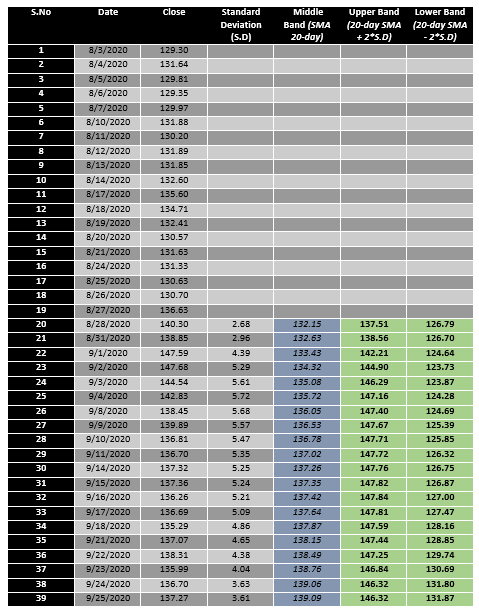 Although many technical analysis software such as Metastock, Amibroker, MT4, and many others provide inbuilt option to plot a Bollinger Band on a data set. The same data could be calculated using Microsoft Excel with ease.

After calculating the standard deviation of the data, we need to calculate the simple moving average, which could be calculated with the AVERAGE function.

Once we have both the data we need, we could calculate the upper band and the lower band with the following formula:

As Bolliger Bands are one type of band, their basic attributes remain as typical bands, i.e., they expand and contract to adjust for volatility. Ideally, when a Bollinger Band squeezes, it increases the likelihood of a sharp price move in either direction, which is known as the Bollinger band squeeze.

Moreover, when a price breaches the upper or lower limit of a squeezing Bollinger Band, it often regarded as an early sign of a trend reversal. However, it becomes paramount to use some confirmation to reckon if the Bollinger Band breakout (a.k.a the volatility breakout) is false or true.

Bolliger Band tends to expand considerably during a strong trend, and prices can breach or hug a band envelope for prolonged periods, which should be checked for divergence with momentum indicators to generate buy/sell/watch decisions.

VIDT Datalink (VIDT) crypto grabs attention with a rally of 139%. Here's why

Why is Voyager crypto trailing today?

Why is Terra Classic (LUNC) crypto witnessing a rally amid adversities?

How did Albanese government respond to RBA’s warning against pay rise of 4-5%?

OXY to LMT: 5 dividend stocks to explore as inflation scorches US