Basins are bowl-shaped structures with higher edges than the bottoms. A basin is a type of depression formed on the Earth's crust and are formed due to forces acting above Earth's surface, like erosional activity or due to the forces acting beneath the surface of the Earth like seismic tremors. Basins may take millions of years for their formation and may range hundreds of kilometres.

Basins can be of many types depending on the location and containment. River basins demarcate a river system; Oceanic basins are located below sea level, Groundwater basins refer to water acquirers, Sedimentary basins are filled with sediments of hydrocarbon or minerals.

Tectonics is the standard mode witnessed in the development of a basin. After a basin is formed, typically it is over time filled up with the sediments shed from the surroundings bringing additional subsidence, causing the basin to be more deeper while making more accommodation space. 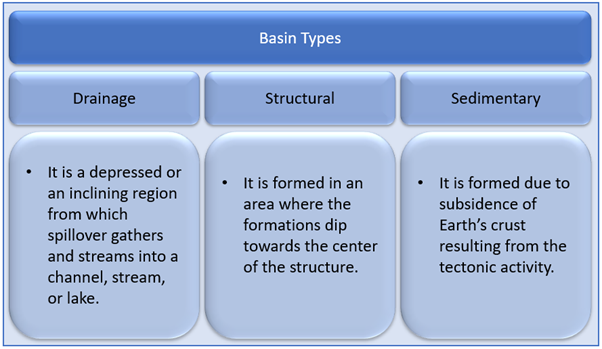 A drainage basin is a depressed or an inclining region from which spillover gathers and moves into a channel, stream, or lake. The flow of any stream or river is collected into the drainage basin. These basins may vary in sizes ranging from few square kilometres to millions of square kilometres. Closed basins have no outlet, and any stream entering into it cannot exit.

The structural basin is formed in an area where the formations dip towards the centre of the structure. A structural basin is similar to the stack of progressive smaller bowls fitted into the next larger bowl. Each bowl represents independent rock formation or layer, maintaining concentric arrangement. The size range of these basins may range from a few kilometres to hundreds of kilometres.

Sedimentary basins are formed due to subsidence of Earth's crust resulting from the tectonic activity. A depression is formed on the surface of Earth where sediments from the surroundings get accumulated. Extra subsidence can be noticed when sediments accommodate the depressed region creating an overload. Their shapes may range from circular to oval or elongated. Irregular shapes can also be found. The size of these basins may range from tens to hundreds of kilometres in diameter. There are more than 600 sedimentary basins on Earth with over 150 basins containing petroleum resources.

How are Basins Formed?

When two plates move away from each other creating a horizontal stretch by ridge push or trench pull mechanism, the lower hot portion of the lithosphere moves slowly away from the mainland compared to the relatively upper cooler lithosphere. The crust's brittle nature due to cold temperature tends to create a fracture or fault resulting Earth's surface to subside. The subsidence creates an accommodation space for the sediments to deposit.

Another case of divergent boundary creating a basin is observed where lithospheric plates stretch, resulting in oceanic basins' formation with central ridges.

When two lithospheric or oceanic plates converge, a collision takes place. A denser plate subducts under the less dense plate, creating a foreland basin, for example, Molasse Basin in Germany.

When oceanic plate subducts under the continental plate, Trench slope basins and accretionary wedges are formed due to the thrusting movement of deep-sea sediments scrapping off from the subducting oceanic plate.

Back arc basins are formed on the continental magmatic or intra-oceanic island due to the subducting trench and slab rollback. Another form of basins known as Retro-arc-foreland basins is formed in the fold and thrust belt creating a continental crust juxtaposed against young magmatic arc.

When the two plates pass one other parallelly, the strike-slip fault comes into existence. Basins are formed at vertical fault plane curves when the curves move apart from each other. A negative flower structure is formed when the plates get to pull apart. An excellent example of this case is the Los Angeles basin.

SBLK to DVN: 5 stocks with over 9% dividend yield to explore?

Here’s why Coronado (ASX:CRN) shares are on investors’ radar today