COVID-19 has created an environment of uncertainty and volatility for many fintech companies, with issues like accessing funds for start-ups in the early stage because many investors focused on established names among fintechs with a clear business model.

However, as the economy emerges from lockdown and sets in recovery mode, coronavirus can prove beneficial for fintech stocks. There has already been substantial growth in digital financial services and e-commerce platforms as people switched to online mode of shopping and making payments to maintain social distancing rules that have been imposed worldwide.

Let’s have a look at 4 ASX-listed stocks to get familiar with their respective performances.

As per the trading update dated 19 August, Afterpay believes that its profitability for FY20 will be much higher. Afterpay expects unaudited FY20 Net Transaction Loss (NTL) as a percentage of underlying sales to be about 0.38% compared to 0.55% in its previous update in July.

Other expectations of Afterpay for FY20 included of the followings:

This week, Afterpay also declared plans to accelerate its growth through expansion in Europe. Afterpay’s subsidiary company Clearpay entered into an agreement with NBQ Corporate SLU (NBQ) to acquire Pagantis and PMT Technology.

Pagantis is a BNPL and credit provider in Spain, Italy, and France with an addressable market of 150 billion euros.

NBQ will get 50 million euros for Pagantis and other payments if the equity value of Pagantis reaches certain levels and fulfilment of other considerations.

In July-end, Ecofibre posted a full-year NPAT of $13.2 million in FY20 for the period 30 June, up from $6 million in FY19 due to robust growth in revenue, rise in gross margins and persistent strong cost management.

Some of the highlights from FY20 results includes of the following:

The Company has a range of subsidiaries like Ananda Health, a manufacturer in retail pharmaceutical sales channel in the US. During the FY20 period, it signed a deal with CVS Pharmacy, largest retail pharmacy company in the US.

All Ananda hemp products are being prescribed by health practitioners for different conditions and are available under the Special Access Scheme and Authorised Prescriber Scheme within Australia.

Ecofibre also commercialised its new Hemp Black line of clothing in FY20. Hemp Black started manufacturing yoga wear in April 2020 to develop its brand and demonstrate the technology, but with COVID-19 outbreak, the focus shifted to masks and neck gaiters. This resulted in a break-even in FY20.

On 24 August, Ecofibre updated on the acquisition of textile business, TexInnovate, to support the commercialisation of Hemp Black. On completion scheduled, next month on 1 September, Ecofibre would make a payment of US$21 million.

The BNPL firm also announced that it has agreed for $100 million debt funding facility with US firm Victory Park Capital Advisors, LLC (VPC) to fund the Zip Business receivables. This facility will provide Zip with the flexibility and capacity needed to support its business.

Recently, Zip Co attained a record month and gave an update on its targeted acquisition of QuadPay, Inc. In June, Zip announced that it would purchase remaining shares of QuadPay in a deal worth $403 million, but the it is still due for shareholder approval, which is set for 31 August.

Let’s have a look at the performance of Quadpay during July 2020. The BNPL firm recorded:

FlexiGroup announced its FY20 results on 26 August, which is a mixed bag and included a massive fall in profit.

Some of the highlights from its FY20 results include: 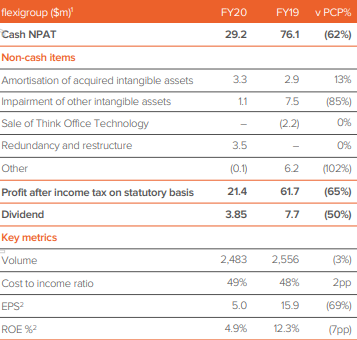 FlexiGroup CEO, Rebecca James stated that the equity raising would allow the Group to strengthen its balance sheet and its brand, including its BNPL service Humm, to grow ahead.