Retailers in the United Kingdom registered stronger-than-anticipated sales rise for October after a slowdown in September. Nevertheless, supply chain issues led to the shrinking of stocks to record lows since 1985, according to a report by the Confederation of British Industry (CBI). Sales are expected to further increase in November, although retailers are keeping a close watch on the latest surge in new coronavirus infection in the country.

Shortage of workforce and HGV drivers, supply chains inadequacies combined with uncertain public health conditions are making it difficult for the retailers to plan ahead of the Christmas and holiday season. Here is a detailed review of the investment prospect in three FTSE retail stocks - Marks and Spencer, Next and JD Sports Fashion. 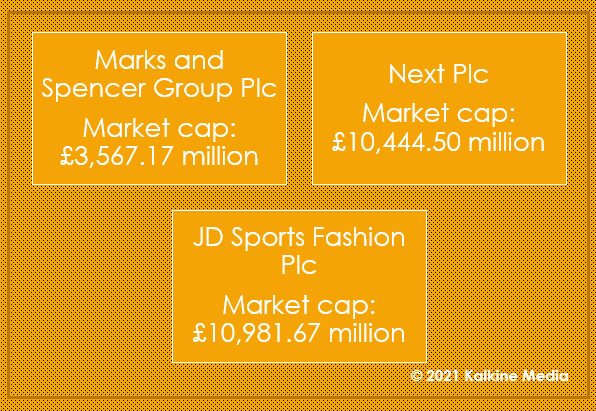 Marks and Spencer Group raised its guidance for adjusted profit before tax for 2021 to more than £350 million.

Next upgraded its guidance for the year ended January 2022 with profit before tax expected to reach £800 million, representing an increase of 6.9% compared to 2019 and £36 million more than its previous guidance of £764 million.

JD Sports Fashion is a retailer of branded outdoor wear, fashionwear and sportswear. Recently, JD Sports Fashion completed the acquisition of an 80% stake in Cosmos Sport S.A. in Cyprus and Greece.