The retail/supermarket space in the UK is buzzing with action, witnessing some big-ticket investments. These companies are the most sought-after targets among the investor community. Among these, the most recent has been the US-based private equity group Clayton Dubilier & Rice (CD&R) takeover of Morrisons for £7 billion. Increasing pent up demand, rising vaccination rates, and reopening of the economy are all driving sales across retail stores, both online and offline. 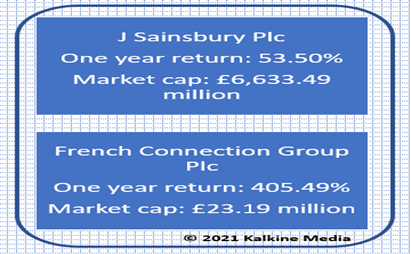 Here we will explore the investment potential in two retail stocks – Sainsbury & French Connection Group, who are now being said to be on investors radar.

J Sainsbury is one of the largest supermarket chains in the United Kingdom. It is engaged in the sales of groceries, homeware, clothing and electricals, among other items. There were reports that Apollo Global Management Inc was looking for a supermarket acquisition after losing on the Asda bid.

For FY 2021, Sainsbury’s profit before tax declined by 39% year-on-year to £356 million. The company’s board proposed a final dividend payout of 7.4 pence per share to shareholders.

The shares of Sainsbury gave a return of 53.50% in the last one year to shareholders.

The shares of French Connection Group gave a return of 405.49% in the last one year to shareholders.

The rising number of foreign investments in UK-based retail and supermarket groups is a major factor driving up investor interest in these shares. Retail stocks offer attractive return and hence investors often have these stocks on their radar.