Sales of electric cars have been surging across the globe, while fossil fuel-powered vehicles are on a decline. One in every five cars sold in the EU in Q3 2021 was an electric vehicle, as per European Automobile Manufacturers' Association (ACEA). Battery-powered electric and plug-in hybrid vehicle model sales in the European Union constituted about 19% of all vehicle sales in the region. However, sales of battery electric vehicles increased by about 57% to over 212,000 units and plug-in hybrid models increased by 43% to 197,000 units.

Sales of petrol cars in the region declined by 35% in Q3 but accounted for about 40% of overall sales. Sales of diesel cars during the quarter declined by over 50% during the quarter and accounted for 18% of the overall sales. The growing need to meet stringent carbon emissions targets is driving manufacturers and consumers to leverage government subsidies on electric vehicles. The European Commission has proposed a ban on fossil-fuel vehicles from 2035 to speed up the switch to zero-emission electric vehicles to combat global warming. AMTE Power Plc, Kodal Minerals Plc and Bacanora Lithium Plc are some of the electric vehicle-related stocks under discussion. 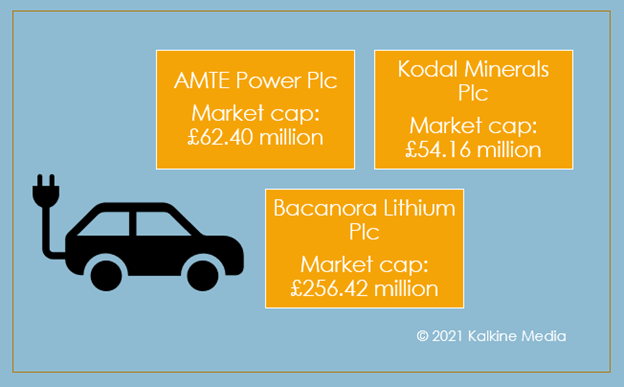 AMTE Power is a developer and manufacturer of lithium and sodium-ion battery cells used in specialty applications. In March 2021, the company completed its successful admission to AIM, raising gross proceeds of £12.9 million.

Kodal Minerals is a mining exploration and development firm. The company is focused on the Bougouni Lithium Project in Mali and gold assets in West Africa. In August 2021, Kodal Minerals’ Bougouni Mining Licence application was forwarded from the Ministry of Mines, Energy and Water for final review. Due to the growing global demand for electric vehicles, the company plans to increase the production of spodumene lithium used in manufacturing EV batteries.

Bacanora Lithium is a UK-based lithium development and exploration firm. Ganfeng Lithium, a leading battery metal producer based in China, will take over Bacanora Lithium for a cash consideration of £284.8 million. In June 2021, Bacanora Lithium’s stake in Zinnwald Lithium declined to 35.5% from 44.2% as a result of Zinnwald’s buy-out of Deutsche Lithium.

Bacanora Lithium’s market capitalisation currently stands at £256.42 million. The shares of the company were trading at GBX 66.75 at 11:13 AM BST on Friday 22 October 2021. In the last one year, the shares of Bacanora Lithium returned 127.12% to shareholders.