In the wee hours of trading, the NYSE-controlled Dow Jones Industrial Average traded largely unchanged, the broader S&P 500 jumped more than 0.20%, while the tech leader Nasdaq Composite registered a day’s high at 14,573.46, after rising over 0.60%.

The market participants were apparently relieved after the annual inflation rate in the US witnessed a slight upward change, however, the rate scaled a fresh 13-year high of 5.4% in September as compared to 5.3% in August of 2021, data published by the US Bureau of Labor Statistics revealed.

On a sequential basis, the inflation rate jumped to 0.4% with the underlying cost of shelter, food, energy, and new vehicles contributing majorly to the upswing. The decreasing costs of transportation services, used cars and trucks and medical care helped in counterbalancing the upsurge, but failed to alleviate the inflationary pressures. Meanwhile, the consumer price index based inflation rate, excluding food and energy, in the US topped 4% in September as compared to the same period a year ago.

The present month will remain susceptible to the upcoming macroeconomic actions as investors are waiting for major indicators to rejig their respective trade setups before the spending splurge period of Christmas.

The domestic markets hovered in the negative territory for most part of the day, barring the mid-cap barometer FTSE 250 as upbeat third quarter corporate earnings propelled the index with the shares rising up to 8%. 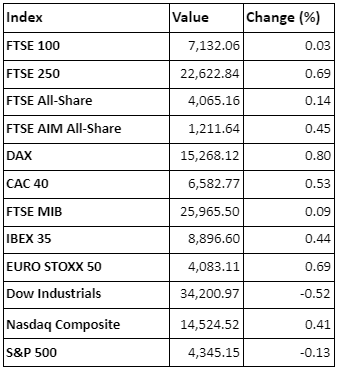