US Market News: The major indices of Wall Street traded in a green zone due to a positive shift in momentum for investors’ sentiments in China. Among the gaining stocks, Best Buy (BBY) shares went up by about 6.99% after the top-line revenue and bottom-line profitability came out to be more than the consensus estimates for the second quarter. Cara Therapeutics (CARA) shares rose by about 5.60% after it had received the US FDA nod for the Korsuva injection. Cigna (CI) shares grew by around 2.33% after the Company announced a stock repurchase agreement worth approximately USD 2.0 billion. Advance Auto Parts (AAP) shares went up by around 0.76% after the Company raised full-year sales forecasts.

UK Market News: The London markets traded in a green zone boosted by the strong performance of heavyweight mining stocks.

John Wood Group shares dropped by about 1.16% after the Company had shown a significant reduction in the top-line revenue during the first half and subsequently forecasted full-year revenue lower than the prior year.

FTSE 250 listed Spectris shares rose by around 1.06% after the Company had agreed to sell the NDC Technologies unit to Nordson for approximately USD 180 million. Moreover, the Company will use the proceeds to strengthen the balance sheet.

PureTech Health had reported encouraging clinical trials pipeline with two Phase 2 and four Phase 1 trials along with the announcement of interim results. Moreover, the shares went up by around 0.42%.

Essensys shares grew by around 0.23% after the Company had shown a marginal rise in recurring revenue during FY21. Moreover, the full-year revenue grew by around 2%. 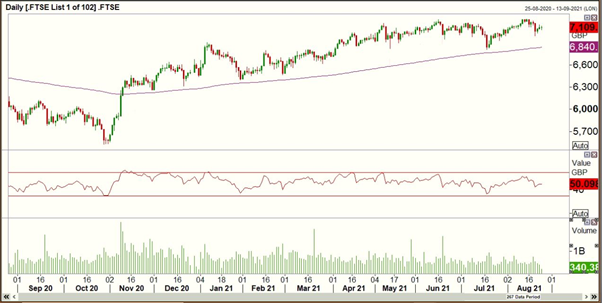