Mears Group PLC is a UK based company that provides housing and care services to the public and private sector. The Company categorizes the business under Maintenance, Development and Management segment. Mears Groups is included in the FTSE AIM All-Share index. 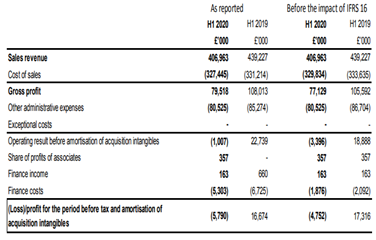 In H1 FY20, the Company reported revenue of £407.0 million that was lower than £439.2 million a year ago. The revenue was supported by the contract extension of Asylum Accommodation and Support Contract (AASC) in FY19. Mears Group reported operating loss £6.7 million in H1 FY20 from an operating profit of £18.1 million in H1 FY19. The adjusted operating loss before amortization of acquired intangible assets was £1.0 million during the reported period. The normalized earnings per share were negative 4.28 pence in H1 FY20. As on 30 June 2020, the order book stood at £2.7 billion as few of the contracts were extended. The Company won the maintenance contract of close to £120.0 million in H1 FY20 that includes a contract of £85.0 million with Exeter and £21.0 million contracts with both Hammersmith and Fulham. The maintenance tenders with live bids have value close to £450.0 million where the Company can participate. The Company would dispose of the Domiciliary Care business, and it would receive £4.0 million on completion of the transaction. At the end of the reporting period, Mears Group had net debt of £62.1 million and abstained from announcing the interim dividend. The Company would resume the dividend once the economic condition is back to normal. The Company increased its borrowing facility to £192.7 million from £170.0 million.

1-Year Chart as on August-19-2020, before the market close (Source: Refinitiv, Thomson Reuters)

The Company highlighted that the maintenance work has picked up after the economy reopened and it was 25 percent and 42 percent of the normal level at the end of June 2020 and July 2020. The maintenance bid has been deferred due to the pandemic, but the Company had a reasonable win rate for contracts. Mears Group has withdrawn from the under-performing contracts. The Company offers essential services, and thus it would play a critical role in the revival of the UK economy.

Essensys is a UK based technology company that provides software-as-a-service (SaaS) platforms and cloud services. Connect and Operate are two SaaS platforms provided by the Company. Essensys is included in the FTSE AIM All-Share index.

1-Year Chart as on August-19-2020, before the market close (Source: Refinitiv, Thomson Reuters)

The Company is confident about the long-term performance that is underpinned by the recurring revenue and the future pipeline. The conditions would remain challenging, but the resilient business model would help to sustain the volatility. Essensys had 26 contracts for new Connect sites that it would deliver in H1 FY21. The main focus of the Company is expanding the customer base and customer sites. The Company has started the first stage of the international expansion plan after fundraising in April 2020. It has grown the sales team in the US and plans for the second stage of expansion that includes regions such as Europe and APAC in H1 FY21.