Wood Group (John) plc (LON: WG.) recently announced the extension of its revolving credit facility to May 2023. The international engineering and consultancy firm said that its $1.75 billion facility would reduce to $1.5 billion in May 2022 and would stay at the same level until maturity in May 2023.

Wood Group has recognised the need for a lower debt, given considerable financial headroom and a comfortable liquidity position. The decision was announced on 9 October 2020, when the company’s stock closed at £220.90, up 1.10 per cent.

Sources said that due to strong support from its relationship banks, the extension of the principal debt facility was secured at competitive market rates. In addition, there would be no changes in the covenants and remain at 3.5 times earnings before interest, tax, depreciation and amortisation (EBITDA) on a pre-IFRS (International Financial Reporting Standards) 16 basis.

The FTSE 250-listed oilfield services company’s net debt stood at $1.22 billion at the end of June 2020. On the same date, the ratio its of net debt to adjusted EBITDA was 1.96 times. This ratio did not include leases. As compared to the total financing facilities of more than $3 billion, the undrawn facilities at the company remained at $1.627 billion. The total financial facilities consisted of the United States (US) private placement debt of $880 million having maturity dates weighted towards 2031. 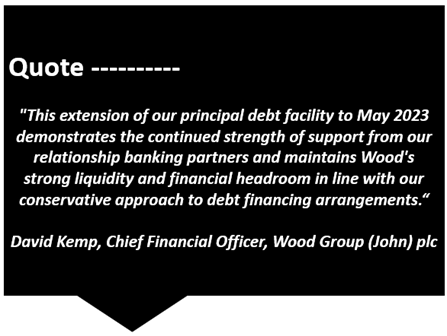 More on the plate

Taking ahead its past successful association with Norwegian energy company Equinor, Wood Group received another contract worth $84 million at the end of September 2020. Under the agreement, the engineering company would provide engineering, procurement, construction, and installation (EPCI) services in Norway. Equinor develops oil, gas, and renewable energy (wind and solar) in more than 30 countries.

Wood will deliver entire topside changes required at Equinor’s Grane installation to prepare for the tie-back of the Breidablikk subsea development. The key changes would comprise integration of new pipelines and an umbilical, apart from enhancing capacity for produced water at the site.

In mid-September, Wood Group was awarded another $42 million contract from the energy company Equinor. This contract was on behalf of Gassco to provide EPCI services at the Kollsnes gas processing plant in Norway. Gassco is a leading gas transporter from Norway, Europe and is responsible for transporting gas safely from the Norwegian continental shelf.

With this contract, Wood Group would strengthen its capabilities for onshore execution in the region. The delivery of the Kollsnes MEG Upgrade (KMU) project would require extending the fourth MEG train at the plant.

Also read: Shell and BP Share Price Collapse - Is It Fear of Another Divergence?

Besides this, Wood Group bagged six new contracts from Canada’s Metrolinx that would be crucial for expanding and upgrading Ontario’s transit network. Metrolinx is an Ontario government agency that works for enhancing the integration and coordination of various modes of transportation in Greater Toronto and Hamilton areas.

Wood Group’s contribution would comprise leading design on two bridge projects. First one is slated to be the Rouge River project that includes structural rehabilitation of an old railway bridge. The second project requires replacing design of the Birchmount Bridge for additional track capacity and future system electrification. Another new contract is for the Barrie Railway Corridor and the subway expansion programme.

In early September, Wood Group announced a partnership with Aspen Technology Inc. to offer its exclusive asset performance management (APM) technology for predictive maintenance. Wood Group’s international clients would be able to potentially enhance the performance of their manufacturing and facility assets through this solution. The solution is known to be built upon industrial artificial intelligence (AI) and machine learning (ML).

The exclusive technology is called Aspen Mtell and is capable of analysing data for historical & real-time operations and maintenance to locate the precise failure signatures that lead to degradation and breakdown of assets. In addition, it is designed to foretell future failures and recommend measures to mitigate probable issues. Aspen Technology embeds AI across industrial manufacturing. Its software assists the companies in oil and gas, chemical, and engineering sectors to achieve their objectives of safety and sustainability, in addition to better operational performance.

The Scotland-based Wood Group is one of the leading international firms that deals in consulting projects, besides providing operation related solutions in energy and the built environment. During mid-August, the company released its half year results for the six months that ended on 30 June.  In the earnings report, Wood Group’s revenue was $4,085, down 14.7 per cent as compared to the same period in 2019. The adjusted EBITDA was down 20.6 per cent at $305 million from $384 million last year.

The company said that the activities in fast growing renewables, downstream, chemicals, and built environment segments accounted for around 65 per cent of its revenues. Wood Group did not declare any interim dividend and said that there would be no payouts till the uncertainty on coronavirus pandemic and volatility in oil prices will be there.

Regarding this fiscal outlook, Wood Group said that it would endeavour to secure work, focus on margin protection and cash generation to decrease its debt. The company’s order book (like for like basis) stood at $7 billion on 30 June, down 16.4 per cent recorded in June 2-19. There was an order book consisting of $3.1 billion that remained due to be delivered in H2 2020. The company expected to generate substantial cash as well as further reduce its net debt in the second half.