Aside from the loss of numerous lives and global economic instability, the COVID-19 pandemic ushered in a general sense of upheaval in our daily lives over the past year. Studies show that social isolation, loss of job and income, financial difficulties and the increasing panic regarding COVID-related health risk has had a heightened impact on mental health.

A Statistics Canada survey conducted in September-December 2020 found that one in five Canadian adults, which is about 21 per cent, suffered from either depression, generalized anxiety disorder or posttraumatic stress disorder (PTSD). 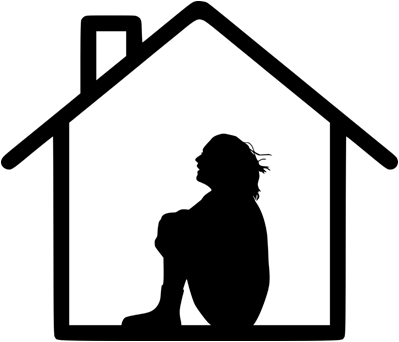 Mental health crisis also appeared to be more prevalent among women, with nearly one in four women candidates (24 per cent) screening positive for at least one of the assessed disorders. In comparison, 17 per cent of men tested positive.

The StatCan survey found that based on the symptoms studied over the previous two weeks, major depressive disorder was the most prevalent of the three mental illnesses that were assessed.

As many as 15 per cent of the candidates participating in the survey screened positive for the disorder. Of them, 27 per cent were young adults aged between 18 and 24, while per cent were 65 and above. 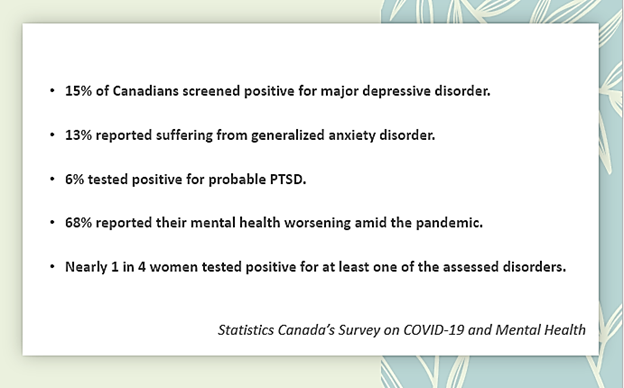 About 13 per cent of Canadian adults reported suffering from generalized anxiety disorder.

The condition, like in the case of depression, was more prevalent among the younger age group (21 per cent) as against seniors (seven per cent)

Based on symptoms experienced over the span of a month, the study reported that about six per cent of Canadians tested positive for probable PTSD. About 11 per cent of them were in the 18-25 age group and three per cent were 65 and above.

The study pointed that these symptoms of PTSD, which can be caused by psychologically traumatic events, may not have been related to the pandemic.

To that end, Statistics Canada noted that while those who screened positive could have been suffering prior to COVID-19, 68 per cent of them reported that their mental health had worsened amid the pandemic.