What is per capita gross domestic product?

Often termed as just per capita GDP, Per capita gross domestic product refers to a measure that is used to calculate a nation’s economic output per individual.

It is observed that developed, small and prosperous countries tend to have high per capita GDP. This metric is used globally by economists to analyze a nation’s prosperity and compare it with other countries. 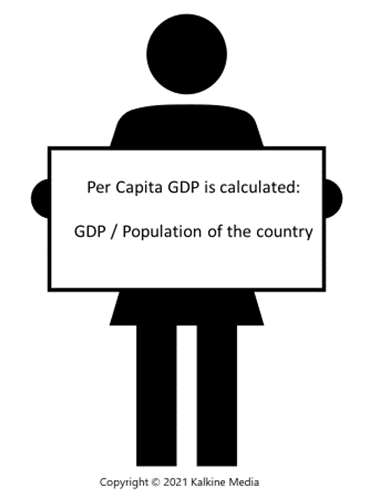 The below-mentioned formula can also be used to calculate per capita GDP:

Economists commonly use it because the components used to calculate per capita GDP are tracked regularly. Countries growing through technical advancements will observe an increase in their per capita GDP.

Some of the interpretations of per capita GDP are:

The real GDP per capita is considered better when compared to per capita GDP. Real GDP per capita calculates a nation’s economic output per individual and is adjusted for inflation for the given year. This metric is also used to evaluate the standard of living in many countries.

Some of the alternative measures used in place of per capita GDP are mentioned below:

The human development index is a numeric value put together and developed by the United Nations to measure and compare the economic and social development of different countries. HDI has the edge over per capita GDP as it focuses on the actual development of the population and not just on the country’s production capacity.

It is used to evaluate the overall economic growth of a country. The calculation of GPI includes everything required to calculate GDP and considers the cost of adverse effects of the economic activity. These negative impacts include ozone depletion, cost of crime, etc.

The New Economics Foundation introduced this method in year 2006. It measures human well-being and the environmental impact of economic activities. It is an important metric to use for evaluating the quality of life because it keeps present and future well-being at the forefront.

Some of the misperceptions are mentioned below:

Higher-income can lead to a good quality of life and add happiness but only to a certain income level. A jump in income, after a point in time, will not affect the quality of life directly. Other factors like good education, equal income distribution, access to healthcare facilities add more to quality of life.

If most of the workforce of the given country works in the informal sector, then their income is not included while calculating GDP and per capita GDP of the country. Due to this, these figures can misinterpret the country as poor.