What is Augmented Reality?

Augmented Reality (AR) is the technology that overlays digital information on any object in the real world to provide an improved experience to the user. The most common example of Augmented Reality is Snapchat, where the user can click a picture and apply objects like eyes, ears, and nose of puppy and many more.

Augmented Reality has the capability to present possibilities that other technologies cannot. In present times, AR applications can be seen across multiple industries all over the world. 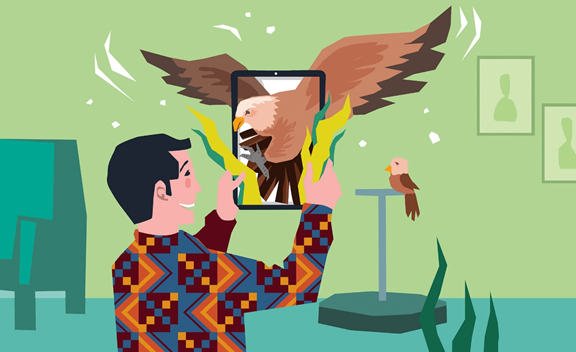 While AR is a blend of the digital world and the physical elements to create an artificial environment, Virtual Reality (VR) is a computer-generated simulation of an alternate world. VR creates simulations that are similar to the real world. Through VR, the user can experience any event or let us say scenery while actually not available in that location.

So, the key difference between AR and VR are:

How does AR work?

After understanding Augmented Reality, it would be interesting to know how it actually works.

Let us understand step by step about the way AR work.

An example of this is the Pokémon Go, which is a popular AR game. The game allows users to catch virtual Pokémon that is hidden across the map of the real world.

Why does AR need a computer vision?

We, as human beings, are efficient enough to recognize the image and accordingly categories them. However, it is not the case with computers. To make the computers understand the images or the surrounding environment, AR needs an understanding of the world in terms of semantics as well as 3D geometry. Semantics helps to identify the object and 3D geometry helps in discovering the way the object is facing. In the absence of 3D geometry, AR content cannot be displayed at the right place and angle. It is significant as 3D geometry enable the user to feel that the object is part of the real world.

To experience AR, there is a need for logic which is to be decided beforehand. It helps in identifying the particular digital content which would be triggered once the system recognized the surrounding. In the live AR system, once the camera recognizes the surrounding, the rendering module displays the appropriate content to the camera feed.

AR has gained immense popularity of late and is being implement across sectors. Some of the real-world applications of AR are highlighted below:

Aussie housing market: Has fear of overpaying overtaken fear of missing out?

Siemens to acquire US software firm Brightly for US$1.58 billion

Why is BitBook (BTT) crypto gaining attention of travelers?

Why Control Bionics’ (ASX:CBL) NeuroNode technology is a lifeline for ALS patients

LimeWire set to roll out NFTs and LMWR crypto: What you should know

US mid-term polls in a year marred by inflation, fear of recession

Toymaker Lego to invest US$1 bn on new US factory