The cryptocurrency market has crashed significantly, and prices of almost all the cryptocurrencies were in the red on Tuesday, May 10. The world's oldest cryptocurrency, Bitcoin, slumped below US$ 30,000 for the first time since July 2021 on Tuesday. However, it later recovered and was trading at US$ 31,525.78 per token at 5 AM EST.

Also Read: ANKR crypto price is down and volume is up 18%. What's next for Ankr?

Due to the decline in the crypto market, the stocks of companies involved in virtual currencies and blockchain have also dipped significantly.

We have selected five stocks that could be considered for holding for the long-term:

The GLXY stock has declined rapidly as the cryptocurrency market has crashed. At market close on May 9, the Galaxy Digital stock was down by 26.3 per cent at C$ 9.97 per share.

Galaxy Digital is a financial services company focusing on digital assets and the blockchain technology industry. Compared to its 52-week high of C$ 43.98 per share, the stock appears to be undervalued, and it could be considered a stock to hold for the long term.

Some analysts believe that if a company has a price-to-book (P/B) ratio of one or less than one, the stock is worth considering. Notably, the GLXY stock has a P/B ratio of one.

Hive provides blockchain infrastructure solutions and is involved in mining cryptocurrencies like Bitcoin and Ethereum (ETH). In April, the company mined 268.8 Bitcoin and achieved a mining capacity of 2 Exahash.

Hive is a growing company, and its stock was priced at C$ 1.5 after the trading session ended on May 9.

The Bitcoin self-mining company said it surpassed the goal of 3 exahash per second in early April. The Bitcoin production increased 75 per cent year-over-year (YoY) in April to 405 new Bitcoin.

As of April 30, Bitfarms had 5,646 Bitcoin in custody, and the company increased its total electrical capacity by 16MW to 137 MW. 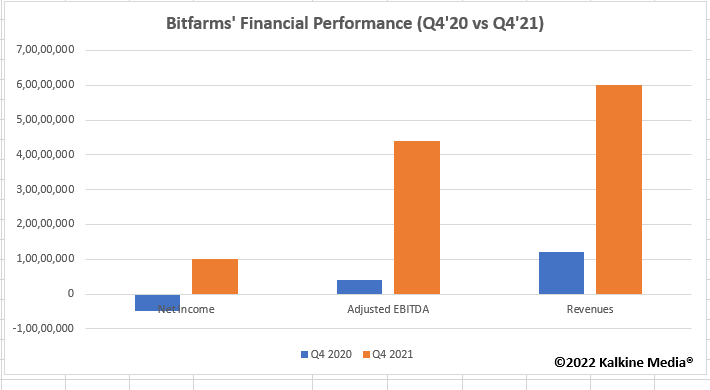 Hut 8 is one of the largest digital assets mining companies in North America, and it said in April that its mining operations would be 100 per cent self-mined.

The average production rate of Hut 8 Mining was 10.3 Bitcoin per day, and it produced 309 Bitcoin in April. The 10-day average volume of the HUT shares was around 2.4 million, and it remains an active volume stock.

Voyager operates as a crypto asset broker and allows its clients to trade crypto assets. In April, the company launched a campaign called crypto for all and said it had completed 36 million consumer crypto transactions as of March 31, 2022.

Voyager said that its estimated revenue was between US$ 100 million to 105 million for the quarter that ended on March 31, 2022. The company said its revenue growth was 70% YoY compared to the midpoint of the estimated range in Q3 2022.

Also Read: TerraUSD (UST) crypto: All you need to know