Stocks of cannabis producer Sundial Growers Inc. (NASDAQ:SNDL) surged 11 per cent at 10 AM EST as investors showed interest in the company after it was announced on October 7 that it is acquiring Alcanna Inc. (TSX:CLIQ), the liquor and pot retailer in Canada.

Sundial is listed on Nasdaq Stock Market, and it is getting investors' attention ever since the announcement came.

As the stock price continues to soar, let's take a closer look at what's next for the shareholders.

What's in store for shareholders?

While announcing the acquisition move, Sundial said that it will acquire all issued and outstanding Alcanna shares for C$ 9.12 per share on a fully diluted basis. The deal is approximately worth C$ 346 million.

Alcanna’s share prices have jumped since late August and the first half of September as rumors surfaced for the first time that a company was interested in buying an Edmonton-based company. A sudden surge in share prices caught the attention of regulators and the company was asked to make a statement on September 15 that it was in acquisition talks with a company.

Following the acquisition announcement by Sundial, the share prices of Alcanna are on the rise. At the time of writing, CLIQ shares were trading at C$ 8.53 after a jump of 5.4 per cent during the trading session on Friday, October 8. 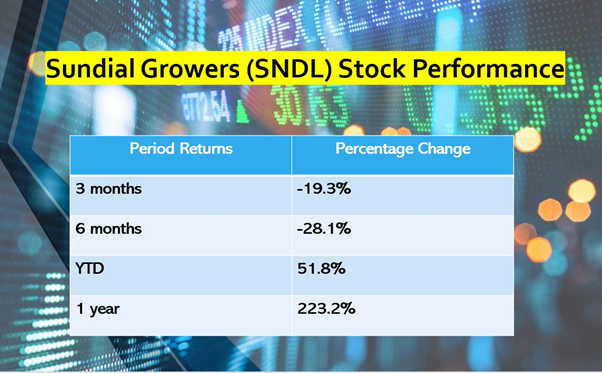 After the acquisition is completed, Sundial could benefit from Alcanna's huge network of 171 alcohol shops. Alcanna had spun off its cannabis retail chain into a separate company and it is known as Nova Cannabis Inc. Notably, the Edmonton-based company still holds a 63 per cent stake in the company.

Upon completing the deal, Sundial's cannabis retail outlets could increase to more than 170 stores as Nova already runs 62 stores across three Canadian provinces.

For Alcanna shareholders, they would own a 16 per cent stake in the merged company. James Burns, CEO of Alcanna has said that the transaction would offer the best alternative for the company.

After the deal was finalized, it represented a significant long-term value creation for Alcanna. The C$ 9.12 per share price represents an increase of 104 per cent year-over-year (YoY) as the CLIQ shares were priced at C$ 4.48 on the Toronto Stock Exchange on October 6, 2020.

The deal will also help Sundial to diversify the business as it will have an opportunity to run liquor stores in the country.