Following the favourable update, Rritual’s stock received a significant boost, with the shares surging 16.92% to close at CA$0.76 on 8 June. 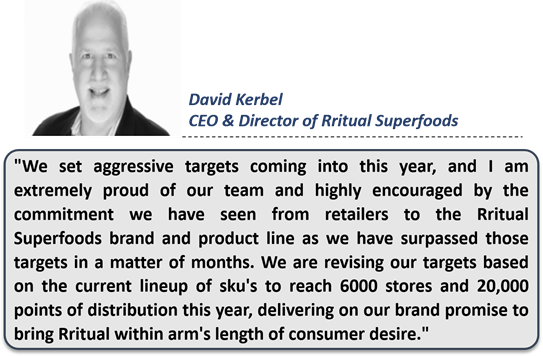 DO READ: Rritual Superfoods teams up with Ultimate Sales to make inroads into Canadian market

Rritual has revised the targets based on retailer commitments to carry the Rritual brand. For instance, Rite Aid has indicated that an additional 20% of its stores will carry Reishi Relax, Chaga Immune, and Lion's Mane Focus – which are Rritual’s three mushroom adaptogen formulations. Also, the Rite Aid locations offering Rritual’s Variety Pack would also double in number.

Rritual’s product line is being welcomed by consumers, with an initial sell-through with major retail partners generating new purchase orders (POs) and expansion of retail locations.

In the first week of July, the Company anticipates that its products would be available across 3000 retail locations with over 10,000 points of distribution. Additionally, as Rritual’s innovation pipeline provides new product offerings, there would be further growth in the distribution of its products.

Last week, the Company rolled out its superfood product line at Rite Aid’s e-commerce platform. The move will expand the distribution of Rritual’s plant-based products and boost consumer awareness across the US.

The global food industry estimates that sales of plant-based food products will increase from US$14 billion to approximately US$1.4 trillion within next 30 years.

What makes Rritual’s product more appealing is that they are all USDA-certified organic. They provide a caffeine-free product option and can be served in combination with other beverages or enjoyed by themselves. Furthermore, the proprietary Immune-Synergy Six Mushroom Blend is the only functional health formulation in the market that comprises a daily prebiotic blend to nourish a healthy gut microbiome.

MUST READ: A look at Rritual Superfoods’ lineup of natural elixirs