The volatility index or the VIX is considered by many to be a proxy to gauge the fear and greed in the market. The index was originally developed by Dr Robert Whaley in 1993, which was based on the pricing of S&P 100 (OEX) options and it originally used eight option contracts to determine a volatility measure.

On a large scale, market participants and large institutions track the Cboe Volatility Index, which utilises the options of the S&P 500 to determine the 30-day implied volatility of the market.

However, the general calculation of VIX could be applied to any major equity index to determine the 30-day implied volatility of the market, and many such VIX exists for many markets. For example, in Australia, the A-VIX, which is a real-time volatility index that tracks S&P/ASX 200 index option prices as a means of monitoring anticipated levels of near-term volatility in the domestic market.

How To Calculate VIX?

While the calculation of VIX could be troublesome for a novice trader, the understanding of its application could be useful in tackling the market better, and the right implementation of the relationship between VIX and an underlying major equity index should be the first priority to weather the storm.

One direct relationship between VIX and the underlying index is that they move opposite in direction with occasional convergence, and the nitty-gritty of the relationship could be better understood in terms of VIX and the Put-Call Parity. 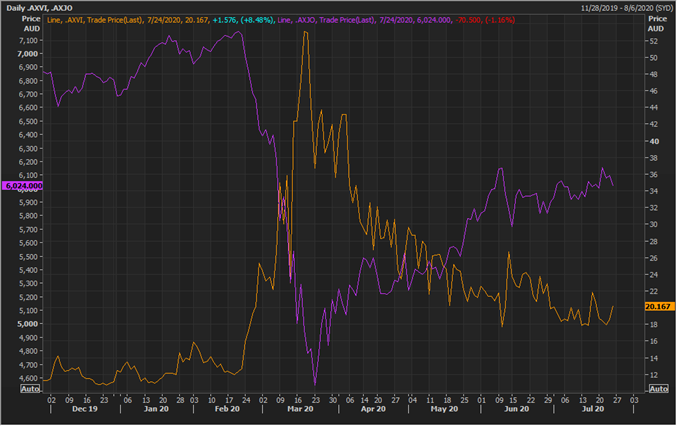 When the market is under pressure, there is a net buying of put options, which results in higher implied volatility. The rapid demand for put options during a downturn pushes the implied volatility for both put and call contracts higher; the reason behind which is the Put-Call Parity.

What is Put-Call Parity?

Put-Call Parity states that the prices of put and call options that have the same expiration and strike price are related, and this relationship exists due to the ability to create synthetic positions in one option through combining the other option with the underlying asset.

So, what happens when a put-call parity breaks down and what it has to do with VIX?

Well, it is always possible to replicate the payout of a long call through combining a put option and a stock position, i.e., a long stock position along with owning a put will result in the similar payout setup as being buying a call option.

When the put-call parity gets out of line relative to each other, arbitrageurs usually take advantage of such mispricing and push markets back into line and eliminate such a riskless profit, which only includes the cost of capital and transaction costs.

Historically, VIX and the underlying index usually hold an inverse relationship, which normally relates to the type of option activity that occurs during a bullish market versus a bearish market.

As per general psychology, when the market rallies, the rush to purchase call options is not as strong, thanks to option geeks such as Alpha, Delta, and the time value of money.

Furthermore, general psychology says that panic is always greater than greed, which is the whole logic behind the opposite move of implied volatility against the underlying index and seldom same directional move in a market uptrend.