Lithium market has witnessed a dramatic fall after reaching its peak in 2018 due to the boom in the electric vehicles (EV), pushed consumers, especially the car companies moved quickly to secure future supply. The lithium carbonate spot prices have plummeted from 58% from its maximum of ~USD 22,890/tonne in February 2018 to ~USD 9,560/tonne monthly average in June 2019. This plunge in prices is due to the courtesy of oversupply in the market and partly from lower than anticipated demand in China.

The high prices led to the commissioning of lithium mineral projects, and production ramp-up of existing mines in Australia and Brazil outpacing the conversion capacity in China has been a foremost influence on tumbling the lithium prices. This increasing supply coupled with lackluster demand, has further tweaked the lithium carbonate (min 99.5%) battery grade, spot prices to USD 9250/tonne as of 12th December 2019. Sinking price has curtailed the production, as producers are now more in the direction of demand responsiveness than the demand expectation strategy due to the lower economic benefit.

In milieu of which it is quintessential to analyse how the lithium companies are performing in Australia vis-à-vis lithium product and operational phase, as shown below: - 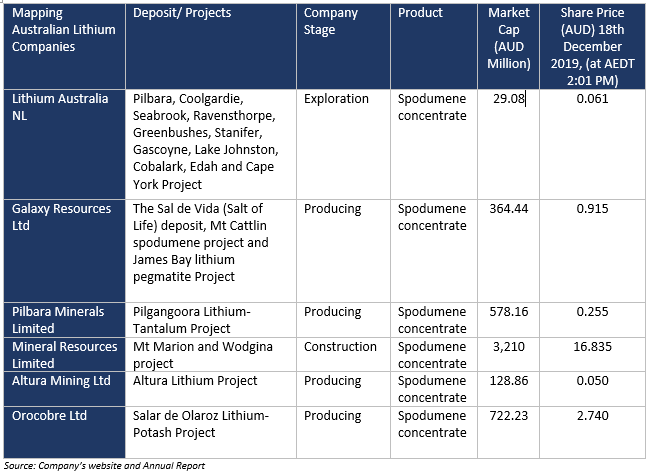 Lithium Australia NL (ASX:LIT) is lithium recycling company from mine waste to create primary battery chemicals via its proprietary SiLeach process. It also has many ongoing lithium projects, currently being assessed for cost-efficiency.

The share price reached its peak value last year on 12th January, trading at AUD 0.21 after which it has followed same trend as lithium price, plunging by ~86% to AUD 0.030 on 29th November 2019. However, recently the share price rose by ~85% post 12th December and continued increasing and reached trading value of AUD 0.074 on 16th December 2019, courtesy to recent announcement of Australia battery recycling view by company at the New World Metals conference and securing funding agreement of AUD 6.3 Million.

GXY’s share price rose ~10% after the announcement of it dropping out of ASX/200 index on 13th December 2019 was released and it closed at a price of ~AUD 0.945. The Company has lost its 80% value in the past two years period due to the sustained decline in lithium price, reduced demand and mounting supply.

No dividend was paid during FY18 nor was it recommended by Directors. It has generated EBITDA of USD 58.1 million from operations and has negative EPS of ~AUD 0.139.

Pilbara Minerals Limited (ASX:PLS) is a lithium-tantalum producer and set to become one of the top lithium raw material producers via 100% owned Pilgangoora project in Pilbara region of Western Australia.

During FY19, company has reported loss of AUD 28.932 Million and the losses has increased by 337% since FY15. And it is expected to continue till the commencement of stage 3 expansion of Pilgangoora project by 2nd Quarter, FY21.

No dividend has been paid, nor it was recommended by the directors. It witnessed basic loss per share of 1.63 AUD cents in FY19.

Mineral Resources Limited (ASX:MIN) is a mining services company along with mining portfolio across multiple commodity in Western Australia and the Northern Territory. It has three operating sites in the Goldfield, Yilgarn and Pilbara region.

The share price increased by 17% from 6th December 2019 to be trading at AUD 2.740 on 18th December 2019 (at AEDT 2:12 PM). The reason behind the share price upsurge is not known, as the company did not announce any news or update during the period. The upsurge might be because of the positive sentiments toward electric vehicle, where lithium-ion batteries are expected to play a vital role in attaining a sustainable society.

1Earnings before interest, tax, depreciation and amortisation, impairment and (gain and other costs on business combination, share of associate losses, share of profit of joint ventures and foreign currency gains/(losses))