Lithium markets across the globe have started stabilising, and the demand for the “whitegold” is again picking up with industry expecting further growth. However, the recent turbulence in the lithium market has prompted the Australian lithium miners such as Galaxy Resources Limited (ASX: GXY) to optimise the current production and expenditure plans.

Australia is the number one exporter of lithium amid its abundant hard-rock resources, which also provides the Australian lithium miners with a competitive advantage as lithium-users who are mainly downstream processors in China for EV industry are constantly looking for more reliable sources of lithium such as the hard-rock deposits.

To know more about the advantage of the Australian lithium miners, and the dominancy of Australia in the lithium supply chain, Do Read: Australia Vs Chile- A Race for the Lithium Crown

Lithium Market Through the Lens of Galaxy Resources

GXY anticipates double-digit demand growth for lithium over the next decade, and further estimates 2020 to be the key inflexion point for the EV sales as the miner expects price and performance parity from the manufacturing scale and technological advancement.

The strict emissions norms and enforcement of government policies across the globe, to reduce the carbon footprints, could further fan the EV demand.

To know more about the renewable energy policies in Australia to reach a net-zero emission, Do Read: Government Policies and Programs To Attain A Net-Zero Carbon Emission

While the long-term forecast for the lithium is still positive, the short-term volatility is prominent across the lithium space, and the lithium market is taking a hit from the global cues such as the trade tensions, falling subsidies, etc., which is further prompting the lithium miners to slash the production capacity till the demand materially improves.

While the demand for lithium looks decent as per the industry projections ahead, the emerging downstream industry is also capturing eyes of many global miners amid higher margins and opportunity to secure sales with the EV industry giants such as Tesla, Volkswagen, BMW, etc.

Sal de Vida is a lithium-rich brine prospect of the company in the Catamarca Province of Argentina. The company recently concluded a process testwork and the evaluation of alternative technologies for the prospect, which resulted in the selection of an in-house developed, simplified flowsheet to support the development phase of the brine-rich prospect. 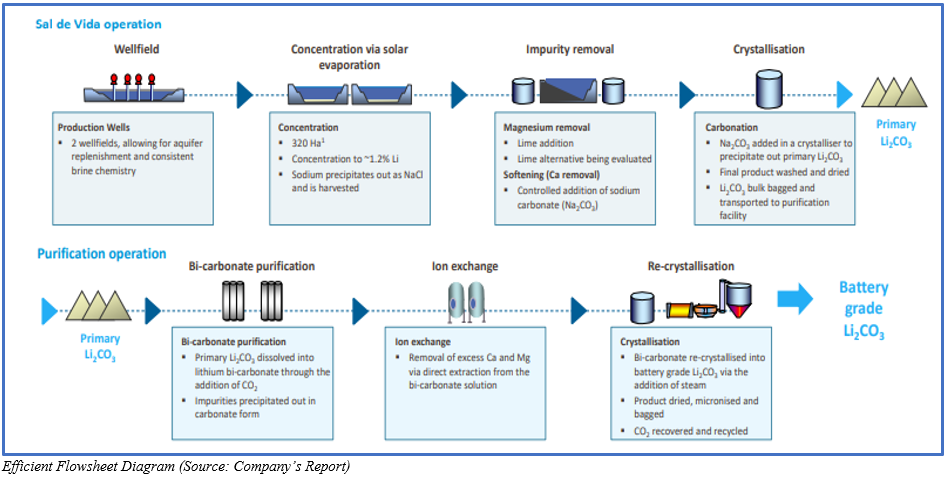 The improved flowsheet, which resulted in the fewer process steps, reduced pond sizing and an accelerated initial evaporation period, would provide the company with an additional advantage in terms of cost optimisation in the production of battery-grade lithium carbonate.

To optimise the cost, Galaxy would de-risk the development via staging project execution in 2-3 modules and would fund the first phase of the development through the balance sheet post a partial equity sell -down of the project.

Galaxy would defer the final investment decision for stage one in the second-third quarter of the first production year of 2022 when the company anticipates the lithium demand to shoot-up.

Prioritising Value Over Volume at the Mount Cattlin Prospect

The Mt Cattlin prospect of the company produced record volumes of spodumene in 2019. The company produced 148,000 dry metric tonnes of lithium concentrate during the first three quarters of the year, which underpinned an increase of 21 per cent on a Y-o-Y basis.

Galaxy recently completed a yield optimisation at the prospect, which increased the throughput capacity to 1.8 million tonnes per annum. The operating cost during the first three quarters of 2019 averaged USD 387 per tonne on a Free-on-Board basis, with a significant improvement in the concentrate grade of 6.0 per cent of lithium oxide from Q2-Q3 2019.

While the production from the Mt Cattlin remained high during the first three quarters of the year 2019, GXY intends to implement a lower activity mine plan in 2020 to reduce the production volumes from the prospect and to maintain the positive cash margins along with the preservation of the resources.

As per the company, the current inventory, along with current production, could stratify the contracted commitments and additional demand in 2020.

The lower activity mine plan is focused on reducing the cost at the bottom of the commodity cycle to remain in the play and to develop the assets in the prevailing environment. As per the company’s estimations, about 60 per cent of reduction in the mining could reduce the operating cost by USD 20 million.

Progress of Engineering Work at the James Bay

The James Bay prospect of the company is a wholly-owned hard-rock spodumene project in Canada. The prospect contains shallow, flat-lying resources with an estimated strip ratio less than 4:1, which makes it amenable for open-pit mining.

GXY would further start a geotechnical program during the first quarter of the year 2020 at the prospect.

Galaxy views the diversity between the brine and hard-rock resources as a core component of the strategy.

How Would the Chairing of the Peronist Party Play in Argentina?

The lithium producers are cautiously optimistic over the elected President Alberto Fernandez who vowed to be lithium industry supportive as compared to the party predecessors.

During the last month’s election in Argentina, the member of Peronist Party- who has supported more economic intervention, Alberto Fernandez won the elections by defeating the business-friendly incumbent Mauricio Macri.

Mr Fernandez, who is all set to take office on 10 December 2019, would be closely watched by the Australian lithium miners with operation in Argentina such as Galaxy Resources Limited.

Despite a reasonable strategy of entering into the downstream processing and deferring the lithium concentrate production till the demand materially increases, the stock of the company took a hit post the announcement to close the day’s session at $1.055, down by 2.315 per cent from its previous close on ASX on the announcement date i.e 18 November 2019. The stock continued to be sombre and closed the day’s trade on 19 November 2019 at $1.050, down by 0.474%.

Galaxy is not just the only Australian lithium miner to actively adopt the strategies to enter the lithium downstream processing, other miners such as Pilbara Minerals Limited (ASX: PLS) also follows the same strategy, and periodically the miner had decided to limit production to align the supply chain with the demand from China.